In 2005, the Reverend Dr Nicholas Sagovsky visited St. Mark’s National Theological Centre in Canberra for the several days. He was Canon Theologian at Westminster Abbey and Visiting Professor in Theology and Public Life at Liverpool Hope University College. He had been a member of the Anglican-Roman Catholic International Commission (ARCIC) for ten years and had written widely on ecumenism and on issues in public life. His most recent book is Ecumenism, Christian origins and the practice of communion (Cambridge: Cambridge University Press, 2000) and he is currently working on a study of ‘Christian tradition and the Practice of Justice’. 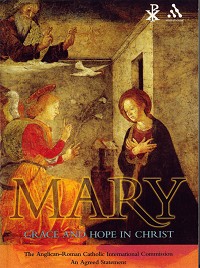 At St. Mark’s, Dr Sagovsky gave a seminar on the Anglican-Roman Catholic International Commission (ARCIC) ‘agreed statement’, Mary: Grace and Hope in Christ, the full text of which is available online here and here.

Dr Sagovsky spoke for about an hour and then fielded comments and questions for nearly four hours (with a lunch break in the middle). It was a fascinating discussion. Dr Sagovsky’s quiet, finely argued, yet humble responses to our thoughts were delightful. It was a privilege to participate in the ARCIC discussions, at just one remove so-to-speak.

I listened with interest as Dr Sagovsky told us his own experience with Mary. At the time of ARCIC beginning its work on Mary, he could not contemplate addressing any prayer to the saints. But now he finds icons such as those of the Virgin and Child to be helpful in devotions and is glad to be able to pray the “Hail Mary”. I am not quite at that point (yet) but I truly respect the carefulness and sincerity of those who are. Mary: grace and hope in Christ helps us to see that this a matter of God-given diversity rather than a dogmatic requirement one way or the other.

There will be plenty of discussion on Mary: grace and hope in Christ, and I cannot add to it here. The Vatican has already published a substantial commentary by Jared Wicks SJ. There will be many more such, no doubt.

In passing, Dr Sagovsky mentioned the somewhat similar work about Mary (using French rather than English) of the Groupe des Dombes. I found very little about it in English, so I though it worth posting something here.

Created in France in 1937 by Abbot Paul Couturier, the Groupe des Dombes (Dombes Group) continues in dialogue and ecumenical research. The Group still bears the name of the Abbey of Notre Dame des Dombes (near Lyon) where for a long time it held its autumn meetings. It consists of forty people, Catholic, Lutheran and Reformed. Its non-official character allows it the freedom to confront the respective positions of the participants’ churches on questions that are obstacles to Christian unity. Since not long after the conclusion of its work on Mary, the group has included men and women. Was this a miracle due to the Blessed Virgin?

The group has issued a number of publications. On its 50th anniversary, it published Pour la communion des Eglises [=’For the communion of the churches’] (Centurion, 1987) containing the principal texts on which it had agreed in the years 1956 to 1970.

Vers une même foi Eucharistique? Accord entre catholiques et protestants [=’Towards a same Eucharistic faith? Agreement between Catholics and Protestants’] (Presses de Taizé, 1972) contained five major documents that had appeared between 1970 and 1986. They are: 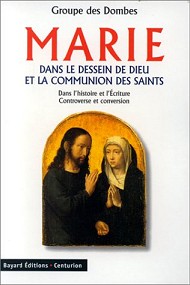 The first part explores preliminary questions essential to an understanding of the the questions of controversy that are discussed in the second: the cooperation of Mary in Christ’s work of salvation; the dogmas of the Immaculate Conception and the the Assumption; the virginity of Mary; and prayer to God through Mary. The document addresses excesses of language and inadequacies of expression that have prevented Mary being located in her true place. The Group seeks to give Mary, “the place that belongs to her in the Christian faith – her full place, of course, but also nothing but her place.”

To advance the discussion, the Dombes Group employs two principle justification by grace through faith, a central principle for Protestants, and the ‘hierarchy of truths, principle of Vatican II. The first allowed a substantial agreement on the ‘co-operation’ of Mary in the work of salvation: she intervenes not on the side of the Saviour, but of the saved. The second principle, which avoids placing all statements of faith on the same level, excludes Marian faith and piety as decisive tests of adherence to Christian faith.

Although the Roman Church regards them as integral to its faith, the Dombes Group does not find the two dogmas of the Immaculate Conception and the Assumption to be an insuperable obstacles to unity. They are a creation, in effect, of the post-separation Roman church and Protestants should not be required formally to adhere to them. On the other hand, Protestants should accept their catholic brothers’ and sisters’ regard for these teachings as dogmas of faith, and accept that they are not contrary to the Gospel.

The Dombes Group reached a common conviction concerning Mary, as did ARCIC. “All our work showed that nothing of Mary makes it possible to make from her a symbol of what separates us.”