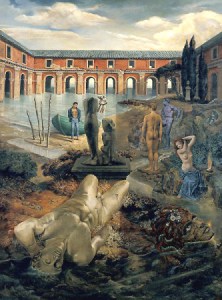 James Gleeson, AO, D.Litt is much esteemed as an elder statesman in Australian art. We saw an impressive exhibition (prepared by the National Gallery of Victoria): James Gleeson: beyond the screen of sight Much of Gleeson’s work is surrealist, which I barely understand and don’t like especially. But the quality of the work was obvious even to the unschooled eye. Three paintings that caught my were Crucifixion (1952), National Gallery of Victoria; Italy (1951), Art Gallery of New South Wales; and A cloud of witnesses (1966) Queensland Art Gallery. Italy [at right] evokes, of course, the devastation to Italy’s built environment and cultural heritage as a result of WWII. I find it most striking. 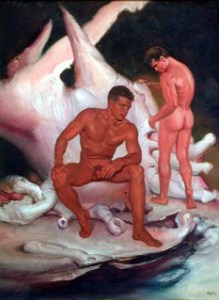 A considerable part of Gleeson’s work is frankly homoerotic, but it is not in the least pornographic. Many of the works explore the subconscious; their meanings are just beyond conscious understanding. Nude men are seen in strange, colorful landscapes that perhaps suggest the realms of unconscious. They also suggest that despite clothes and buildings, we are very much naked in our environment, which we do not fully understand and which can be turbulent. Yet, there is a sense of serenity in Gleeson’s later works.