Yet another show at the NGA: a travelling exhibition of work by Michael Riley (1960-2004) of the Wiradjuri/Kamilaroi people. Riley was one of Australia’s “most important contemporary Indigenous visual artists of the past two decades. His … film and video work challenged non-Indigenous perceptions of Indigenous experience, particularly among the most disenfranchised communities in the eastern region of Australia.” 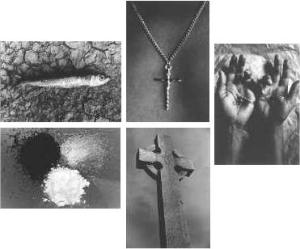 Brenda Croft, Senior Curator, Aboriginal and Torres Strait Islander Art, writes in the introduction to the exhibition that

Riley’s images reflect what he has described as the ‘sacrifices Aboriginal people made to be Christian’. They resonate with loss—experienced not only by the individual, but also by entire Indigenous communities—loss of culture and land in an enforced or sometimes embraced exchange for Christianity. Biblical elements abound in Sacrifice: the cross laid on the chest and standing out sharp against the sky in an unseen cemetery; the shimmering skin of the fish is in stark contrast to the parched earth; the oozing liquid in the dark palms of the black Christ-like figure evoking his struggle on the cross; and the granules of sugar, flour and coffee echoing the rations meted out to Aboriginal people on missions and hinting at the struggles present-day communities face with the onslaught of drugs.

Riley’s photographs in the exhibition include this mystical image, Darell (1989). Curator Gael Newton describes it as “very enigmatic, with the young man’s soft-lit face, eyes lowered and closed, in a Zen-like meditation.” This beautiful picture brings me to pondering “How much of the beauty is from the subject and how much is in the work of the photographer?” 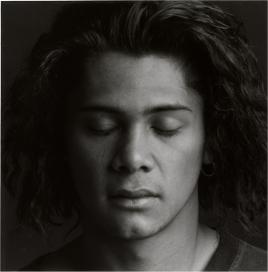