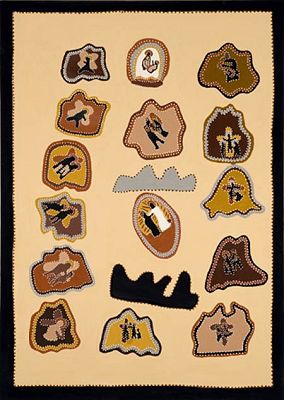 2007 saw the award of the 56th Blake Prize for Religious Art to Shirley Purdie for her “Stations of the Cross” (213×152, ochre and pigment on canvas) The judges described the work as

simply delicious in colour, texture and feeling. It is a marvellously realised painterly journey that recreates the stories told to the artist in childhood of the Stations of the Cross in Warmun country using a breathtakingly beautiful natural ochre pallette made from the earths eroded from the very Kimberley rocks whose mobile shapes enclose and frame the vignettes of story. A solidly honest, confident, and true painting it becomes a meditation on travelling within the artists country following a remembered and cherished biblical journey of suffering and pain towards redemption, and perhaps as well asks us to reflect on loss, pain and the journeys we all need to make towards each other.

The narrative is rendered in traditional ochre paint using the visual language of the Gija artists of Warmun. The relationship between the Gija people of Warmun and the Catholic community is a longstanding and rich, bringing together the traditional spirituality of the Gija people with Catholic teaching—a dialogue between the Ngarrangkarni (Dreaming) and the Bible as the basis for a new worship and new art. 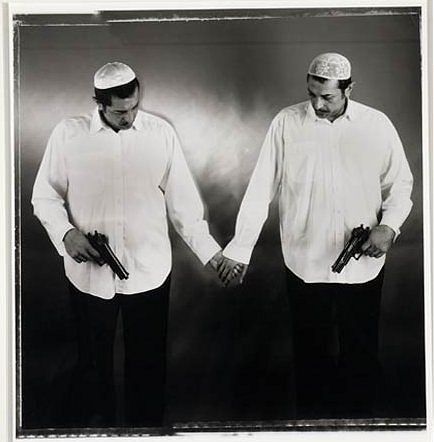 I appreciate the deep spirituality behind Purdie’s painting, but I don’t find it engaging as a work of art. Not many of the 2007 entries did. This photograph by Paul Green and Homi Vessal made me think.