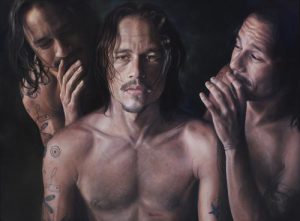 A ‘highly commended’ entry for the 2008 Archibald showed powerfully how a fine portrait can bring the heart of a subject to the viewer and evoke public emotion. The SMH (2 Apr 08) says that:

When Vincent Fantauzzo began sketching his friend Heath Ledger for an Archibald portrait last year, he had no idea it would become an unofficial shrine to the young actor. But the picture has drawn record crowds, triggered a flood of emails and attracted six-figure offers. The portrait is odds-on favourite to win the People’s Choice Award in a landslide and its popularity has helped the Archibald exhibition draw twice the number of visitors as last year. Fantauzzo, 29, has been overwhelmed by the public reaction to his painting. “I’ve had thousands of emails. I still get between 20 and 50 every day,” the Melbourne artist says. “People say they feel like the painting is a tribute, something to remember him by, because it was more like him than his movies.” … When Ledger died in January, Fantauzzo considered withdrawing the portrait from the competition, but was convinced by the late actor’s mother to enter it. … He was been offered “hundreds of thousands” of dollars, but will honour his promise to give the painting to Ledger’s mother, Sally. … The young painter didn’t even think the portrait would be accepted by the prestigious prize when he first started work on it. “My confidence was a bit low so he [Ledger] kept trying to boost me up a bit. He kept saying, ‘It’s going to be great, it’ll win’.”