Now, this is really scary.

“Further global warming of 1°C defines a critical threshold. Beyond that we will likely see changes that make Earth a different planet than the one we know.”

So says Jim Hansen, director of NASA’s Goddard Institute for Space Studies in New York. Hansen and colleagues have analysed global temperature records and found that surface temperatures have been increasing by an average of 0.2°C every decade for the past 30 years. Warming is greatest in the high latitudes of the northern hemisphere, particularly in the sub-Arctic boreal forests of Siberia and North America. Here the melting of ice and snow is exposing darker surfaces that absorb more sunlight and increase warming, creating a positive feedback.

Earth is already as warm as at any time in the last 10,000 years, and is within 2°C of being its hottest for a million years, says Hansen’s team. Another decade of business-as-usual carbon emissions will probably make it too late to prevent the ecosystems of the north from triggering runaway climate change, the study concludes (Proceedings of the National Academy of Sciences, vol 103, p 14288). 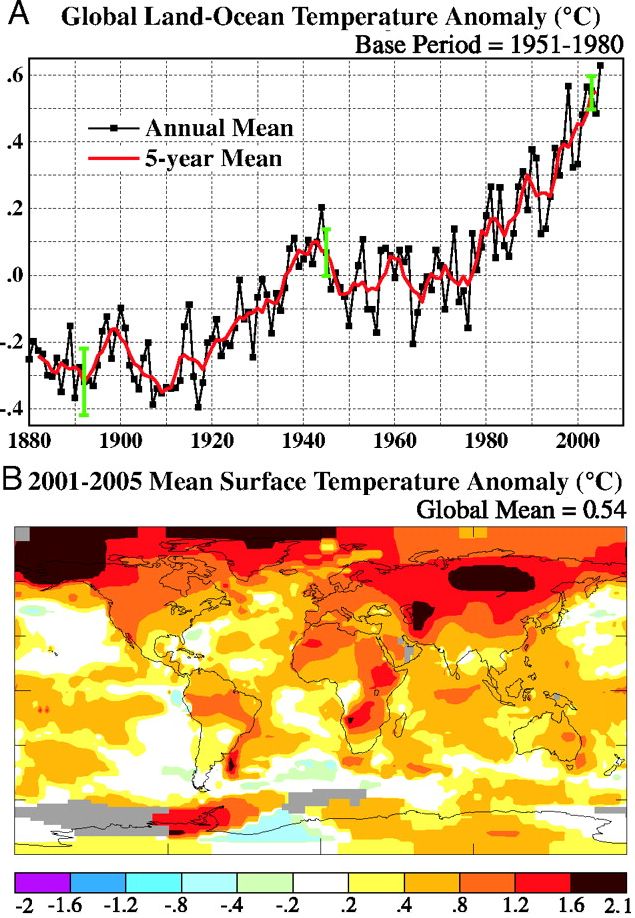 The analysis reinforces a series of recent findings on accelerating environmental disruption in Siberia, northern Canada and Alaska, underlining a growing scientific consensus that these regions are pivotal to climate change. Earlier this month, NASA scientists reported that climate change was speeding up the melting of Arctic sea ice. Permanent sea ice has contracted by 14 per cent in the past two years (Geophysical Research Letters, vol 33, L17501). However, warming and melting have been just as dramatic on land in the far north.

A meeting on Siberian climate change held in Leicester, UK, last week confirmed that Siberia has become a hotspot of global climate change. Geographer Heiko Balzter, of the University of Leicester, said central Siberia has warmed by almost 2°C since 1970—that’s three times the global average.

Meanwhile, Stuart Chapin of the University of Alaska Fairbanks this week reported that air temperatures in the Alaskan interior have risen by 2°C since 1950, and permafrost temperatures have risen by 2.5°C (Proceedings of the National Academy of Sciences, DO 10.1073/pnas.0606955103).

In Siberia the warming is especially pronounced in winter. “It has caused the onset of spring to advance by as much as one day a year since satellite observations began in 1982,” says Balzter. Similarly, Alaskan springs now arrive two weeks earlier than in 1950, according to Chapin.

The Leicester meeting heard that the rising temperatures are causing ecological changes in the forests that ratchet up the warming still further. Vladimir Petko from the Russian Academy of Sciences Forest Research Institute in Krasnoyarsk says warm springs are triggering plagues of moths. “They can eat the needles of entire forest regions in one summer,” he says. The trees die and then usually succumb to forest fires that in turn destroy soil vegetation and accelerate the melting of permafrost, Petko says.

In 2003 Siberia saw a record number of forest fires, losing 40,000 square kilometres according to Balzter, who has analysed remote sensing images of the region. Similar changes are occurring in Alaska. According to Chapin, warming there has shortened the life cycle of the bark beetle from two years to one, causing huge infestations and subsequent fires, which destroyed huge areas of forest in 2004. “The current boreal forest zone could be so dried out by 2090 that the trees will die off and be replaced by steppe,” says Nadezhda Tchebakova, also at the institute in Krasnoyarsk.

Melting permafrost in the boreal forests and further north in the Arctic tundra is also triggering the release of methane, a powerful greenhouse gas, from thick layers of thawing peat. First reports published exclusively in New Scientist last year (13 August 2005, p 12) were recently confirmed by US scientists (Nature, vol 443, p 71).

“Large amounts of greenhouse gases are currently locked in the permafrost and if released could accelerate the greenhouse effect,” says Balzter. Hansen’s paper concludes that the effects of this positive feedback could be huge. “In past eras, the release of methane from melting permafrost and destabilised sediments on continental shelves has probably been responsible for some of the largest warmings in the Earth’s history,” he says.

We could be close to unleashing similar events in the 21st century, Hansen argues. Although the feedbacks should remain modest as long as global temperatures remain within the range of recent interglacial periods of the past million years, outside that range—beyond a further warming of about 1°C—the feedbacks could accelerate. Such changes may become inevitable if the world does not begin to curb greenhouse gas emissions within the next decade, Hansen says.

May be this is Earth’s way of telling President George W. Bush that global warming cannot be ignored: in just one year, the perennial sea ice cover in the Arctic Ocean has shrunk by nearly three-quarters of a million square kilometres, an area comparable to that of Bush’s home state of Texas.

Perennial sea ice is the ice that survives at least one summer, and is usually more than 3 metres thick. Son Nghiem of the Jet Propulsion Laboratory in Pasadena, California, and his colleagues used NASA’s QSCAT satellite to measure the changes in Arctic perennial ice from 2004 to 2005, by comparing ice cover averaged over November and December in each year, the team reports in Geophysical Research Letters (vol 33, p L17501). They found that perennial ice cover decreased by 720,000 square kilometres—a 14 per cent drop in one year. This is a dramatic change compared with the 7.8 per cent reduction per decade that has been recorded since the 1970s. The changes were not evenly spread. Perennial ice made some gains in the west Arctic Ocean, but nearly half was lost in the east. If the trend continues, it could open a vast ice-free region in the east Arctic Ocean, the team says.
— New Scientist, 2570, 26 September 2006, p.5.)

Among other things, the shrinking of the sea ice is threatening the extinction of polar bears and destroying the traditional life of the indigenous peoples that inhabit the fringes of the Arctic Ocean.