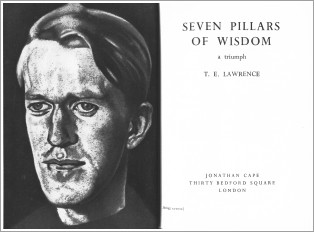 Another treasure from my library: a copy of T.E. Lawrence’s Seven pillars of wisdom: a triumph (New edition. London Jonathan Cape, 1940), given to my father by his mother-in-law, Judith Hitchcock, on his birthday, just two months before I was born (“To Mac, with Mother’s love.” — she was very fond of my father.) I remember my grandmother only distantly, as she died when I was just ten years old. She loved God, was staunch Anglican, deeply joyful and kind, and a good cook, as I recall! And the source of much of the courage inherited by my mother.

The 1940 “New edition” of the The seven pillars of wisdom contains an Introductory chapter that was suppressed in earlier editions. (In it Lawrence criticises the allied leadership and himself for concealing colonial ambitions from the Arabs while supporting their revolt against the Turks.) Though reprinted numerous times, the 1940 edition seems less common on the second hand market than the 1935 edition, though neither is especially valuable ($100 or so).

Lawrence is self-revealing, and his writing fiercely evocative, yet he brings it off in a modest way. Perhaps I can illustrate this by a substantial quotation from chapter one of this great classic (pp. 27-30), now out of copyright.

Some of the evil of my tale may have been inherent in our circumstances. For years we lived anyhow with one another in the naked desert, under the indifferent heaven. By day the hot sun fermented us; and we were dizzied by the beating wind. At night we were stained by dew, and shamed into pettiness by the innumerable silences of stars. We were a self-centred army without parade or gesture, devoted to freedom, the second of man’s creeds, a purpose so ravenous that it devoured all our strength, a hope so transcendent that our earlier ambitions faded in its glare.

As time went by our need to fight for the ideal increased to an unquestioning possession, riding with spur and rein over our doubts. Willy-nilly it became a faith. We had sold ourselves into its slavery, manacled ourselves together in its chain-gang, bowed ourselves to serve its holiness with all our good and ill content. The mentality of ordinary human slaves is terrible – they have lost the world – and we had surrendered, not body alone, but soul to the overmastering greed of victory. By our own act we ere drained of morality of volition, of responsibility, like dead leaves in the wind.

The everlasting battle stripped from us care of our own lives or of others’. We had ropes about our necks, and on our heads prices which showed that the enemy intended hideous tortures for us if we were caught. Each day some of us passed; and the living knew themselves just sentient puppets on God’s stage: indeed, our taskmaster was merciless, merciless, so long as our bruised feet could stagger forward on the road. The weak envied those tired enough to die; for success looked so remote, and failure a near and certain, if sharp, release from toil. We lived always in the stretch or sag of nerves, either on the crest or in the trough of waves of feeling. This impotency was bitter to us, and made us live only for the seen horizon, reckless what spite we inflicted or endured, since physical sensation showed itself meanly transient. Gusts of cruelty, perversions, lusts ran lightly over the surface without troubling us; for the moral laws which had seemed to hedge about these silly accidents must be yet fainter words. We had learned that there were pangs too sharp, griefs too deep, ecstasies too high for our finite selves to register. When emotion reached this pitch the mind choked; and memory went white till the circumstances were humdrum once more.

Such exaltation of thought, while it let adrift the spirit, and gave it licence in strange airs, lost it the old patient rule over the body. The body was too coarse to feel the utmost of our sorrows and of our joys. Therefore, we abandoned it as rubbish: we left it below us to march forward, a breathing simulacrum, on its own unaided level, subject to influences from which in normal times our instincts would have shrunk. The men were young and sturdy; and hot flesh and blood unconsciously claimed a right in them and tormented their bellies with strange longings. Our privations and dangers fanned this virile heat, in a climate as racking as can be conceived. We bad no shut places to be alone in, no thick clothes to hide our nature. Man in all things lived candidly with man.

The Arab was by nature continent; and the use of universal marriage had nearly abolished irregular courses in his tribes. The public women of the rare settlements we encountered in our months of wandering would have been nothing to our numbers, even had their raddled meat been palatable to a man of healthy parts. In horror of such sordid commerce our youths began indifferently to slake one another’s few needs in their own clean bodies – a cold convenience that, by comparison, seemed sexless and even pure. Later, some began to justify this sterile process, and swore that friends quivering together in the yielding sand with intimate hot limbs in supreme embrace, found there hidden in the darkness a sensual co-efficient of the mental passion which was welding our souls and spirits in one flaming effort. Several thirsting to punish appetites they could not wholly prevent, took a savage pride in degrading the body, and offered themselves fiercely in any habit which promised physical pain or filth.

I was sent to these Arabs as a stranger, unable to think their thoughts or subscribe their beliefs, but charged by duty to lead them forward and to develop to the highest any movement of theirs profitable to England in her war. If I could not assume their character, I could at least conceal my own, and pass among them without evident friction, neither a discord nor a critic but an unnoticed influence. Since I was their fellow, I will not be their apologist or advocate. To-day in my old garments, I could play the bystander, obedient to the sensibilities of our theatre … but it is more honest to record that these ideas and actions then passed naturally. What now looks wanton or sadic seemed in the field inevitable, or just unimportant routine.

Blood was always on our hand we were licensed to it. Wounding and killing seemed ephemeral pains, so very brief and sore was life with us. With the sorrow of living so great, the sorrow of punishment had to be pitiless. We lived for the day and died for it. When there was reason and desire to punish we wrote our lesson with gun or whip immediately in the sullen flesh of the sufferer, and the case was beyond appeal. The desert did not afford the refined slow penalties of courts and gaols.

Of course our rewards and pleasures were as suddenly sweeping as our troubles; but, to me in particular, they bulked less large. Bedouin ways were hard oven for those brought up to them, and for strangers terrible: a death in life. When the march or labour ended I had no energy to record sensation, nor while it lasted any leisure to see the spiritual loveliness which sometimes came upon us by the way. In my notes, the cruel rather than the beautiful found place. We no doubt enjoyed more the rare moments of peace and forgetfulness; but I remember more the agony, the terrors, and the mistakes. Our life is not summed up in what I have written (there are things not to be repeated in cold blood for very shame); but what I have written was in and of our life. Pray God that men reading the story will not, for love of the glamour of strangeness, go out to prostitute themselves and their talents in serving another race.

A man who gives himself to be a possession of aliens leads a Yahoo life, having bartered his soul to a brute-master. He is not of them. He may stand against them, persuade himself of a mission, batter and twist them into something which they, of their own accord, would not have been. Then he is exploiting his old environment to press them out of theirs. Or, after my model, he may imitate them so well that they spuriously imitate him back again. Then he is giving away his own environment: pretending to theirs; and pretences are hollow, worthless things. In neither case does he do a thing of himself, nor a thing so clean as to be his own (without thought of conversion), letting them take what action or reaction they please from the silent example.

In my case, the effort for these years to live in the dress of Arabs, and to imitate their mental foundation, quitted me of my English self, and let me look at the West and its conventions with new eye they destroyed it all for me. At the same time I could not sincerely take on the Arab skin: it was an affectation only. Easily was a man made an infidel, but hardly might he be converted to another faith. I had dropped one form and not taken on the other, and was become like Mohammed’s coffin in our legend, with a resultant feeling of intense loneliness in life, and a contempt, not for other men, but for all they do. Such detachment came at times to a man exhausted by prolonged physical effort and isolation. His body plodded on mechanically, while his reasonable mind left him, and from without looked down critically on him, wondering what that futile lumber did and why. Sometimes these selves would converse in the void; and then madness was very near, as I believe it would be near the man who could see things through the veils at once of two customs, two educations, two environments.