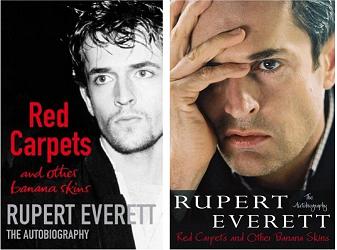 Kerry O’Brien interviewed Rupert Everett on the ABC’s flagship 7.30 Report last night (27 Feb 07) particularly about Everett’s recent autobiography Red Carpets and other Banana Skins. The full transcript is worth reading. I found the final minute or two the most fascinating.

Kerry O’Brien: Are you the kind of person who works out at age 47 what you want to do with the rest of your life, or will you just take things as they come?

Rupert Everett: I think less would be more for me in terms of doing things. I don’t feel very in tune particularly with the world as it is at the moment. Doing things like movies and books and things is great, but I don’t know . . . the world of showbusiness, I think, is kind of tragic to be honest nowadays, and it doesn’t interest me that much.

Kerry O’Brien: What are the key features of the tragedy?

Rupert Everett: It’s just one big asset strip, really. If you’re in a successful movie now, you have to come out with a line of panties if you want to keep the trajectory of your career going up and then after the line of panties you have to come out with something else and success is the driving force of everything. It sets some people up as having things and the people that have not are meant to look at it and admire it and want to have it and I don’t think it’s getting us anywhere and I think, actually, in terms of the world, we’re being so entertained, out of our minds, that we are incapable of looking at actually what is happening to us.

Kerry O’Brien: In Red Carpets you describe a quiet reflective moment when you were making a film in Colombia when you felt, "lost from my own life and, looking back, that was my endless quest; not acting, not fame, not love, just losing myself". Explain that?

Rupert Everett: I think the self, really, our self is an exhausting, anxious, conflicted, aggressive, angry, frightened thing. And we drag along all this baggage from the past everywhere and we’re always anxious about what’s going to happen next, how are we going to keep going, how are we going to pay this bill, how are we going to keep our children in school whatever it is. I found, very early on, particularly traveling a lot in movies, some of the most peaceful times were when you were just lost somewhere away from everything and everyone and no one really knows you or who you are or where you are and no one in your life knows where you are and there’s a feeling of intense peace. 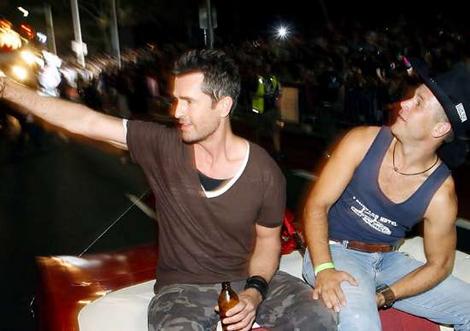 Everett was Chief of Parade in the 2007 Sydney Gay and Lesbian Mardi Gras parade and he invited cowboy and author Adam Sutton to join him. Adam, a bushman and accomplished horseman from Cooranbong, NSW, was christenend "the real gay cowboy" in the press. He is a friend of a actor Heath Ledger who played a gay cowboy in Brokeback Mountain. ABC TV’s Australian Story made a program on Sutton’s life and he wrote a book Say It Out Loud: Journey of a Real Cowboy, which was launched by the Governor of NSW, Marie Bashir.