Marketer Carey Sherrell was sacked from the 2007 American ‘reality’ show The Apprentice when teams were asked to design a line of men’s and women’s swimwear, but buyers didn’t like Carey’s ‘skimpy’ suit. Trump said Carey’s suit was a “loser”—and fired him for it. 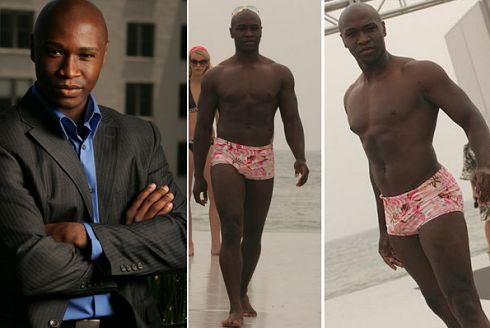 Perhaps the suit didn’t sell because it was too ‘gay’. More than one suit was on offer by each team. Sherrell talked about it in an interview.

You don’t see the fact that Trina Turk has a store in Palm Springs and that 70% of the male consumers that shop there are gay. If we know that about our client, why wouldn’t we want to bring something to the forefront about our client to help sell it? You don’t see that and it comes off as, “Carey’s gay and so he designed this bathing suit that would just be about gay people.” I designed the women’s suits too … You don’t see the footage of them approving the designs or anything like that. … It”s hard. It’s hard to come off as this guy who just designs small bathing suits, because that isn’t the case.

You don’t see me, for instance, saying to the team when they tell me to put on the swimsuit that I don’t want to wear it and I’m not going to be on the runway. You only see me on the runway, wearing the suit. There was a whole debate to that. I’m not a model, I’ve never walked down a runway in my life. But, when you see me on the runway, smiling, you think “Oh, this guy really loves his suit.” I understand marketing and know that you have to sell it; that’s why I’m smiling, although I’m nervous as all get-out. I can’t let you see that though, because I’m selling the suit.

Oddly enough, Sherrell was soon to launch his own swimwear line — of board shorts.

If anyone were prudishly troubled by Carey’s offerings, they might try wearing one of these pink numbers from Aussiebum. I’d wear one, if I were about 40 years younger and 30 pounds skinnier. 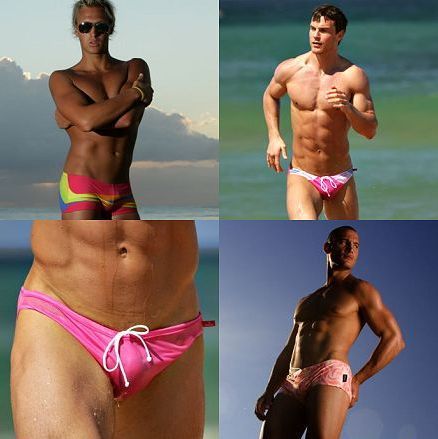 On the other hand, if pink doesn’t suit, there are other possibilities. Some people shouldn’t bother, perhaps.