Times Online listed Libby Purves’ choice of the ‘best’ 20 religious t-shirts. To me, most of them were either tacky, feeble, looked hideous, or all three.

A few Christian thinkers have written about the gospel, the consumer and the tee shirt, Stephen Nicols for instance. He quotes John Kavanaugh, who

sees a rather stark contrast between what he broadly calls “consumer values” and “Christian values.” Consumer values emphasize the “commodity form of life,” which reduces people to things, minimizes personal communication and sees relationships as transactions. Kavanaugh further speaks of the commodity form of life creating an “empty interior,” in which we lose our sense of our self and which leads to “broken relationships,” with advertisements telling us that cars and clothes can do more for us than people. Such a dehumanized form of life results in the “degradation of justice” and a “flight from the wounded.”

Given how Kavanaugh frames it, capitulating to consumer culture as the means for evangelism means adapting to a commodity form of life, a form that seemingly runs counter to Christ’s rather personal call and commission of the original fishers of people. Commodifying evangelism turns persons who relate into customers who buy, a rather alien approach to that of Christ’s call to make disciples.

This all seems a bit over serious to me. But a least a religious t-shirt should either be in good taste or have some punch in its message-preferably both. 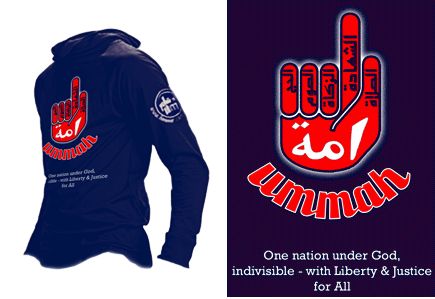 One shirt in Purve’s list that really does look good and has some impact is this, from Islamic vendor Ilmwear. It has ummah meaning ‘community’, next to the US pledge of ‘One nation under God, indivisible, with liberty and justice for all’. The words on the fingers of the hand speak of Islam’s five pillars. 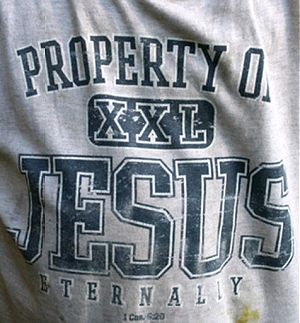 The one on the left is at least a little witty. Comments on the Timesonline article had a few punchy ideas:

Easter’s off, they’ve found the body.
God doesn’t believe in atheists.
I’m a non-practicing atheist.
I’ve found Jesus. He was hiding behind the sofa.
Jesus is coming . . . quick, look busy.
Jesus is coming and he is pissed.
Jesus isn’t lost. Do I need to find him?
Jesus saves, and makes incremental back ups.
Jesus saves, but Pele scores off the rebound.
Jesus was a Palestinian.
Joseph coming out of the stable saying ‘It’s a girl’.
Muslims do it five times a day.
Think it possible that you may be mistaken. 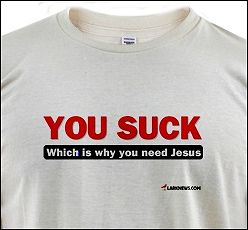