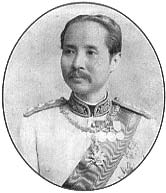 King Chulalongkorn, Rama V (Phra Chula Chomklao Chaoyuhua) was the fifth king of the Chakri dynasty of Thailand (b. 1853, d. 1910; reigned 1868-1910). A reformer and moderniser, he was one of Thailand’s finest kings. He is the great-great-grandfather of the present King, Bhumibol Adulyadej, Rama IX.

There are many pictures and shrines dedicated to Chulalongkorn, particularly in Bangkok. Interest in him has grown since the early in the 1990s, creating a form of veneration rather like that which some Christians have for a patron saint. Each October 23, the day of his death, is commemorated throughout Thailand. Each Tuesday (the day of the week on which the king was born) a large gathering takes place before a bronze equestrian statue of Rama V in front of the old National Assembly building.

James and I like Thai food and we’ve tried quite a few Thai restaurants. Almost all of them have a picture of Chulalongkorn displayed in a place of honour. In the place we tried another last night, an entire wall of the was dedicated to three large Warhol-like posters of Rama V, and his portrait adorned the menus. (The food, however, was very ordinary.)