In 2005, Islamic fundamentalists forced the closure of the 2005 Jakarta CP biennale because of the work of two artists, Agus Suwage and Davy Linggar, demanding their prosecution for ‘blasphemy’ or ‘pornography’. 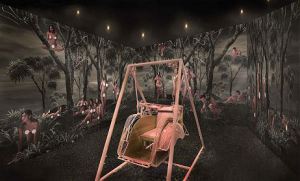 This installation Pinkswing-Park, 2005 by Agus Suwage and Davy Linggar was what caused all the fuss. I don’t like it much (Some of the other works at the Biennale are most elegant.), but that’s not the point. Suwage in particular is an important and valuable creative spirit, who should not be crushed by fundamentalist ignorance. Nor should Indonesia, a free spirited nation of diverse and talented artistry, be crushed into a bland conformity. Indonesia, home to more Muslims than any other nation, is emerging into democracy after decades of near-dictatorship. Must she now succumb to the fanatics?

The groups who protested over the press cartoons of Muhammad are targeting pornography in their battle to make Indonesia more strictly Islamic. The Indonesian parliament is expected to introduce a sweeping anti-pornography law. Expected to be passed by June, it imposes a rigid social pattern; couples who kiss in public will face up to five years’ imprisonment, as would anyone flaunting a “sensual body part”—including their navel—and tight clothing would be outlawed. Most women’s groups are horrified, entertainment industries believe it could destroy them.

One of Indonesia’s leading contemporary artists, Agus Suwage initially trained as a graphic designer at Bandung Institute of Technology (ITB). His work explores the contradictions of human nature—how violence and pain are inextricably linked to joy and pleasure.

Born to Javanese and Chinese parents in Purworejo, Central Java, Indonesia in 1959, Agus Suwage spent his youth in the city of Yogyakarta before studying graphic design at the Faculty of Fine Art and Design of the ITB (Bandung Institute of Technology), in Bandung, from 1979 to 1986. He then moved to Jakarta and took up work as a graphic designer and illustrator.

While he may be biologically Chinese, Suwage’s cultural consciousness is essentially Javanese. He is comfortable with displacement and paradox, the outcome of the convergences of his surroundings. This gives rise to a sense of the unexpected in his work, allowing him to be provocative yet cheeky, humorous but darkly so. 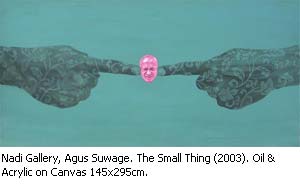 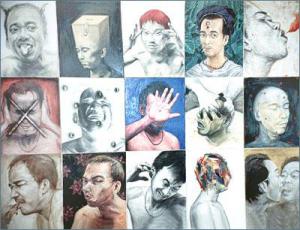 Suwage is an artist of substance. He is definitely not a pornographer. Legacy Project curator Jim Supangkat writes:

Suwage is a good example of “the right man in the wrong place.” Born in Central Java of Javanese and Chinese parents, he grew up in a Javanese environment with a strict Catholic education. After working as a graphic designer and illustrator, he decided to dedicate all his time to creating artworks. Married to a Moslem Sudanese woman, Suwage is an example of an individual who continually goes through a process of negotiation regarding his own identity in a plural culture. While Nindityo Adipurnomo created a cynical work entitled Who is Afraid of Javanese, Suwage seems to say, “Who isn’t afraid of being Indonesian Chinese?”

Self Portrait demonstrates the psychological tension in Suwage’s life. The 24 self-portraits he paints show his face revealing many different personalities in many different situations. The unpleasant sensations the portraits reveal—pain, suffer, disgust- are related to deep psychological pain, hatred and anguish that have their roots in destiny and represent Suwage’s search for self. Since he has a Chinese heritage, he feels Chinese and has discovered that being Chinese in Indonesia is unpleasant because of the threats to the Chinese minority.

Even while working as a graphic artist, Suwage sketched and drew on every scrap of paper he could find. Even now he has hundreds of little pictures piled in his cupboard. He begins work on his creations by developing the sketches recorded on those scraps. Suwage did not study oil painting on canvas, or the other traditions of painting; he is much closer to everyday media including photocopies, photography, pencils, charcoal, ballpoint pens, poster paints, and even coffee grounds, which he uses to color his sketches. Although he now uses oil paint and canvas, Suwage continues to explore different uses of non-standard media and equipment.

Mark Forbes writes in his piece in The Age.

Suwage believes his work captured attention because one of the models, Anjasmara, is a popular soapie star. The two models, photographer Davy Linggar and the curator of the biennale, Jim Supangkat, are also facing criminal charges.

Supangkat declined to be interviewed and Suwage is increasingly bitter at his reaction to the protest. However, a detailed interview with Jim Supangkat has been published on a webpage about the biennale.

After hundreds of demonstrators had descended on the exhibition, a panicked Supangkat ordered the offending panels to be covered with white cloth. Other artists draped their own works in solidarity and Supangkat closed the biennale, permanently.

Suwage believes his prosecution is linked to pressure to pass the anti-porn law and the desire of fundamentalists to impose Islamic rule. Afraid of prison, Suwage says he is determined to fight. “Maybe it’s good for me and Davy to become the victims, maybe we need martyrs,” he said.  Based out of a small cafe gallery in Jakarta’s backpacker precinct, Suwage and a motley collective or artists mobilised against the new law. “From this case, we make a manifesto for art against the pornography bill,” he said. “It’s very dangerous for freedom of expression but it also threatens other aspects of society.” 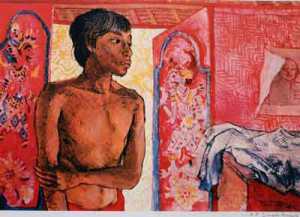 Meanwhile, Bali’s embattled tourist authorities are alarmed at the prospect of sunbathers being arrested. (Bali is Hindu and animist more than Muslim.) Are we going to see Donald Friend’s works, such as this Red Interior stripped from the walls of Balinese galleries?