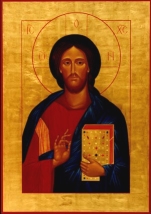 Among the kind messages I received assuring me of prayers following the death of my mother was a card depicting an icon of Christ the Lord made by Kathyrn Carrington for installation in the Chapel of Christ the Lord in the Episcopal Church Centre in New York City. The magnificence of the card prompted me to look up Kathryn Carrington’s beautiful work, prints of which she has for sale.

In an article by Kathryn McCormick, Presiding Bishop Griswold, who commissioned this and another icon, comments that,

Icons have their own power. They are a form of pictorial scripture. Growing numbers of people in the West, who have been starved for something more intuitive to balance western rationality, have found them to be a window to divine mystery. They are profoundly interesting. Because they come from the East, they transcend all the divisions we have experienced in western Christianity. Maybe it’s through icons that we are receiving a sense of mystery that has been so much a part of eastern Christianity.