There were massive crowds as the National Galley of Australia’s show From Turner to Monet came to its close. I was attracted by some pictures that were not of the massively popular French tradition, but a little different from what we usually see in Australia. 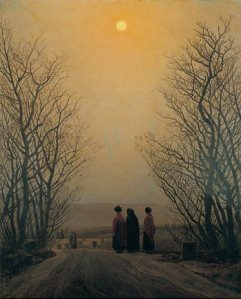 ‘Three women walk stiffly towards the cemetery very early in the morning.’ Caspar David Friedrich might almost have been painting to instruction. Unlike English Romanticism—the painter J M W Turner and the poet Wordsworth—Friedrich’s perception was directed to specific symbolism, a sensuous iconography of the soul, by which the northern tradition had long distinguished itself from the rest of Europe. Without figures this would be a moonlit landscape, symmetrically organised and expressive of natural order. With three women the scene is imbued with new human and religious meanings.

Even without the aid of the title, the composition enforces a theme of prelude, death, and anticipation. The forces so quietly suggested are of death and regeneration. Their journey repeats that of the three Marys who visited Christ’s grave early on the first Easter morning. Nature ushers them forward, and also moves on with the cycle of life: rebirth after death and light after darkness.

The Museo Thyssen-Bornemisza says of this painting,

German Romantic painting is represented in the Museo Thyssen-Bornemisza in a canvas by the most outstanding representative of this movement: Caspar David Friedrich. Easter Morning has been dated to the artist’s mature period before the attack of apoplexy which he suffered on 26 June 1835, after which he abandoned oil painting and worked in watercolour and wash drawings. The canvas belonged to Wilhelm Wegener, who in 1859 described it in the following manner: “Three women walk stiffly towards the cemetery very early in the morning. The sun has not yet risen and high in the sky there is still the moon although it no longer lights the landscape or casts shadows. The old trees on either side of the path are in bud and in the fields one sees the green shoots which have survived the winter. Nature is celebrating its awakening.” As well as accurately describing the painting, this passage by Wegener sets out its symbolic content which is on the lines of the symbolism to be found in all of Friedrich’s oeuvre.

The painting was part of a pair in the collection of Wilhelm Wegener together with another entitled Early Snows, which is now in the Hamburg Kunsthalle and whose dimensions are identical to Easter Morning. The Thyssen-Bornemisza canvas has been compared to another painting by Friedrich, An Evening Walk, dated around 1830-1835, and there is a sheet in the Kupferstichkabinett in Dresden which has studies for figures in both paintings. In the lower part of this drawing Friedrich has drawn in detail the group of three women on the road leading to the cemetery, on the same scale as the painting but isolated and without the landscape setting. However the artist reversed the direction of the group in translating it from paper to canvas.

Friedrich’s landscapes, silent and profoundly tranquil, are imbued with a symbolism referring to life and hope conveyed through a personal iconography. In this painting, as in others, he uses particular elements to communicate to the viewer a religious message without employing traditional religious images. The artist uses the landscape to convey his message and to express his own feelings. In this painting a few silent figures, with their backs almost to the viewer, are posed on the edge of a pathway which begins in the foreground of the painting. The bends of this path among the fields are used to accommodate two more groups of women also in silent attitudes. The glow of the moon, still visible high up in the sky, counterbalances the cold light of dawn which begins to flood the horizon. The moon and the dawn together with the time of year chosen by Friedrich, that season when the still present winter begins to give way to the beginning of spring, has been interpreted as symbolic of death and life after death. The message of hope conveyed by the painter has a specific reference to the Resurrection in this painting. — Mar Borobia