We saw the NGA’s Constable: Impressions of Land, Sea and Sky. The show had only a small number of John Constable’s large pictures, including Salisbury Cathedral from the Bishop’s Grounds (1822-23), A boat passing a lock (1826) and The Vale of Dedham (1827-28). But it inlcuded many of his quick, on-the-spot sketches, such as Rainstorm over the sea c.1824-28 and a large group of his sky studies, each with the time of day, date, wind direction and weather conditions under which they were painted.

Sebastian Smee reviews the show in The Australian (18 March). “When you look at a Constable”, he says, “you are not just looking at a picture, you’re looking at the making of a picture. It is something alive, like the weather it responds to, in a state of flux and continual becoming.”

Of the large pictures, I especially like this one, The Vale of Dedham. Once there were many kitsch reproductions of Constable’s work—literally on chocolate boxes, as well as on shortbread tins and such. But most of the prints I’ve seen are murky and dark. There’s so much fine detail in the Constable’s big landscapes, some details just a couple of millimetres in scale, within of a two metre picture. As well there are dark areas that are luminous when seen ‘in the flesh’ but dull in reproduction. So with The Vale of Dedham; there’s wonderful life, movement and detail, far reaching perpective and intimate, close, human detail. 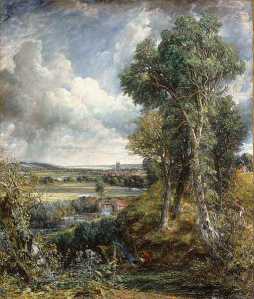 Frequently provocative commentator, Humphrey McQueen writes in The Bulletin (7 March) that exhibition of 108 works “will appeal to those who turn to art for reassurance.” Yet Constable’s work, McQueen notes, was innovative and his subject matter,

which now looks tranquil, was at the intersection of political, economic and religious upheavals. . . . Moral purpose saturated Constable’s landscapes, which were propaganda for Tory landholders in their struggle against the Liberal free-traders to remove the duties on grain imports. His cornfields are therefore not innocent pastorals but assert the rights of the squires, including his own brother. Constable sided with the landowners against the riotous labourers and with both against urban capitalists. Similarly, his treatment of cathedrals affirmed his attachment to church and crown, in opposition to the emancipation of Papists.

. . . The pleasures from Constable are both visual and intellectual. His canvases tell us stories about the elements and of social conflict. Yet his storms and rainbows were never symbols for revolution and peace, but reminders that all is flux.

I had never thought of Constable as being political! Meanwhile, the conservation of the Vale of Dedham and Stour Valley as an area of natural beauty is very much an active project.