ABC TV’s 2005 weekly half-hour dancesport competiton Strictly Dancingwas good fun. Semi finalists, Adam Francis and Alexander Bryan, from Melbourne, wowed the audience and achieved a high score from the judges. They are exciting to watch. Adam (on the right in this picture) is gay, but his dance partner Adam (on the left) is not, and dances with a woman as partner in other competition.

Adam and Alexander saw that in Europe same sex couples are becoming accepted within dance sport competition and decided to try it here. “The Australian scene is a little bit behind, and we’re trying to show that it’s also acceptable for any two guys to dance together, or any two girls.” They recently won the Midsumma same sex dancesport championships 2005 in the Latin and New Vogue styles. 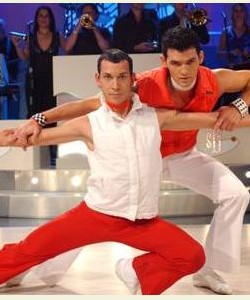 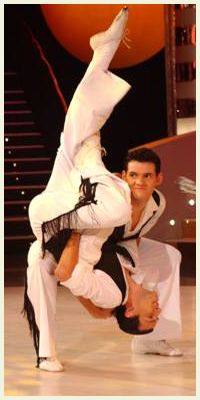 Adam is a professional dancer and dance teacher. “If I have any spare time it would actually be practicing dance, so basically if I’m not sleeping or eating I will be dancing.” “I used to be a swimmer and a bit of a computer geek” says Alex, until one day when he went along to a dance class with a girl that he liked, and he’s been there ever since. Alex says he and Adam are quite similar, “a bit cheeky, a bit crazy, very caring, very kind and considerate.” He feels the connection that they have gives them a competitive edge, “we try and portray the whole sexual thing as just two guys dancing together, and however people interpret that then that’s fine, but we try and play our part as men.” (source: www.abc.net.au/strictlydancing/txt/s1335512.htm)

CXWeb gives an insight into the astonishing amount of people, equipment and work needed to set up a show like this. 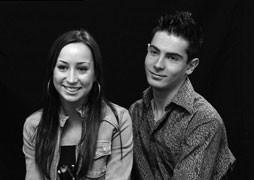 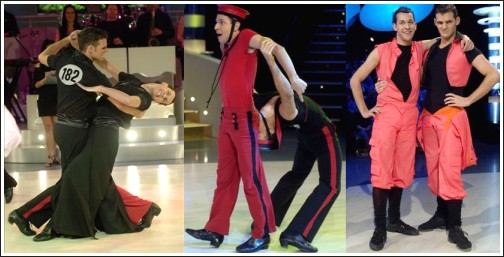 Adam and Alexander won their ‘Group Final. They were wonderfully entertaining and good fun. In the Grand Final, with 44.7 points of a possible 50, they were second. Athena and Lawrence, beautiful and skillful, were deserving winners on 45.6.