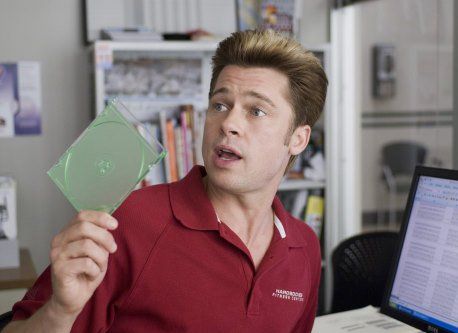 raved about Burn After Reading, lauding it as very funny. James and I went along and were bored and disappointed — clichéd spy jokes and marital infidelity and incompetence on a grand scale. As Eureka Street‘s reviewer, Tim Kroenert, comments, Burn After Reading, "is preoccupied with issues of sexual identity and fidelity, which bear disproportionately on the events." Yawn.
Brad Pitt’s campy caricature as Chad the gym-bunny air-head was great, however, and gave a smile or three. It seems that the NYT’s reviewer Manohla Davis agrees (12 Sep 08)

Burn After Reading, the clubby, predictably self-amused comedy from Joel and Ethan Coen, has a tricky plot, visual style, er, to burn, but so little heart as to warrant a Jarvik 8.
Not that you probably won’t choke up a couple of ho-ho’s in between a few hee-hee’s whenever Big Daddy Brad Pitt, as a nitwit gym rat with a Pepe Le Pew two-tone hair-stack, twitches across the screen or the camera nuzzles one of the other goofy gargoyles so beloved by the Coens. Mr. Pitt’s Chad is the overripe second banana to Linda Litzke (Frances McDormand, Joel Coen’s wife), who has some vague job at the gym where the two sort of work. Chad’s a buffoon (the hard body as soft brain), and Mr. Pitt has been charged with delivering a caricature rather than a character, but because the actor loves playing sidemen and conveys such natural, irrepressible (irresistible) sweetness, he’s also one of the film’s saving graces.
It could use a few more.