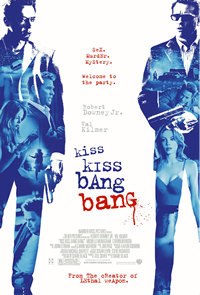 Margaret Pomeranz of the ABS’s At the Movies, reviewing Kiss Kiss Bang Bang, gives it four stars and says it’s “It’s a laugh out loud experience.” No it is isn’t. The only time James and I laughed was at the end of the movie—because of the sheer ridiculousness of the thing. I’m still not sure whether it was very good or very, very bad. “Robert Downey Jr, — is terrific as the film’s hero and narrator.” Well, yes, he was kinda cute. I’m with AO Scott of the New York Times:

Shane Black’s Kiss Kiss, Bang Bang is not an altogether bad movie. It’s just a movie with no particular reason for existing, a flashy, trifling throwaway whose surface cleverness masks a self-infatuated credulity. . . .

As this shaggy-dog crime story hums along, you can almost convince yourself that something interesting is going on. And, in a way, something is, in that the film, as empty stylistic exercises sometimes do, offers its cast the chance to do some inspired, fast-paced riffing. [Robert Downey as Harry Lockhart and Val Kirmer as Perry van Shrike] engage in a lot of pixilated, hard-boiled banter, hurling one-liners, non sequiturs and riddles at each other with impressive speed and agility.

There are better ways to have spent 2 hours and $15 each.