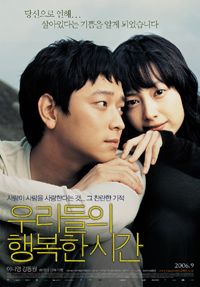 Urideul-ui haengbok-han shigan [=Our Happy Time]; English title: Maundy Thursday (2006).
Based a book by famed novelist Kong Ji Young, Maundy Thursday is both a tender love story and a critique of capital punishment. The film uses the stolen time between uncertain life and certain death for an unlikely romance between a wealthy but suicidal young woman and a death-row prisoner. Director Song Hae Sung (Failan) and actors Kang Dong Won and Lee Na Young give a delicate portrait of two compelling characters. Author Kong’s works usually balance social criticism and popular appeal. She was praised for raising awareness about the abolishment of capital punishment and received a special award from the South Korean committee of Amnesty International.
In the story, university lecturer Yu Jung (Lee Na Young) does not trust her surroundings and does not believe in love. Troubled by a traumatic past, she has attempted three times. At the her aunt’s urging, she reluctantly enters therapy and meets convicted murderer and death row prisoner Yun Su (Kang Dong Won). Drawn to each other, two people with no will to live find a new motivation for life: a meeting in the prison chapel very Thursday.
I liked it; the acting was very fine, the photography appealing and the treatment sensitive.