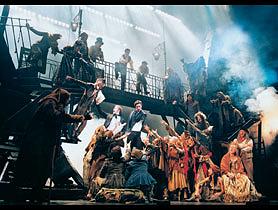 The Canberra Philharmonic Society presented a new local production of Les Misérables, directed by Dianna Nixon. James and I were there.

It was the first time I’d seen or heard Les Misérables which has been showing in London for over 20 yrs.

There was a some fine singing. Yet I was restless for much of the performance. The plot was long and complex, and I had to read the program notes to follow it — but that’s no different from many operas. The seats were too close together and uncomfortable — but that’s no different from many concert halls. I like almost every kind of music, though I haven’t seen very many musicals — perhaps five or six. I prefer concerts.

I agree with City News reviewer Jorian Gardner who found the stage direction to be "flat" but I also agree with Gardner’s praise of the singers, especially the stand-out performance of Michael Politi as Javert. Fiona Sullivan as Fantine and Daniel Wells as of Marius were also superb.

I’m used to hearing good singing without electronic amplification. During the large production numbers, it was hard to tell which person was singing. All the voices seemed to come from all the speakers. In some scenes, it almost seemed as if the singers were miming, though I’m sure they weren’t! It didn’t sound any different from a recording. For the same reason, I find it difficult to see the point of a pop concert. The recordings always sound better and the artists are so far way you can hardly see them.

However, I eventually figured out that Les Misérables didn’t quite gell for me because I wasn’t comfortable with serious, even heavy, ideas portrayed in light music.