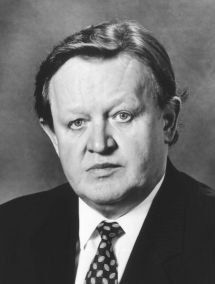 Until a few years ago, how many would have recognised the name Martti Ahtisaari?

Blessed are the peacemakers for they shall be called the children of God.—Matthew 5.9

This year, the five members of the Norwegian Nobel Peace Prize committee selected a laureate who has actually made peace. And not once, but several times. It would be hard to name another mediator who has had more success resolving intractable conflicts around the world than the former Finnish president, Martti Ahtisaari.

Nobel-worthy peacemakers come in two distinct varieties. The more renowned are the statesmen who negotiate with one another and sign treaties or cease-fires. . . . Ahtisaari belongs to a less visible, more self-effacing category. He plies his trade as a firm but patient arbitrator. Like a surgeon for wounded nations, he is called in to heal the injuries of ethnic, territorial, or religious conflicts.

His persistence helped bring about the birth of an independent Namibia in 1990, freeing the people of what had been South West Africa from apartheid-era South Africa. He was acting at the time as a UN envoy, as he was in 1993 when he served as special adviser to the UN secretary general on the former Yugoslavia.

But then his peacemaking vocation was interrupted from 1994 until 2000 while he served as president of Finland. Even so, he responded to a call from the European Union in 1999 to go to Belgrade, where he succeeded in persuading the bellicose Serb leader Slobodan Milosevic to accept NATO’s terms for ending the war over Kosovo.

In 2005, Ahtisaari brought together leaders of the Indonesian government and the Free Aceh movement to negotiate a peace accord ending a war for secession that had lasted for 30 years.
(IHT 12 Oct.)