Amidst all his other crimes, this symbolises one reason why Mugabe must go and will not be remembered fondly: a 100 trillion dollar note issued by the Reserve Bank of Zimbabwe. 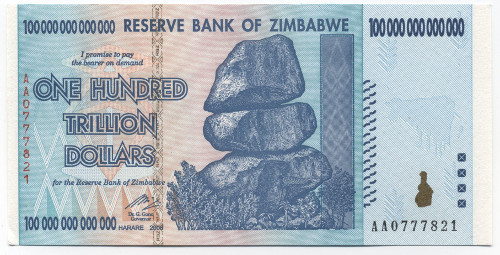 Zimbabwe now uses the US dollar and other foreign currencies.

Yet even this pales into insignificance compared with Yugoslavia’s massive hyper inflation from 1988 to 1994. By 1994 one dinar was worth roughly between 1 and 1.3 thousand trillion trillionths of what it had been before 1990. The largest denomination banknote printed was a 500 billion dinar note issued in 1993.

The German hyperinflation of the 1920s was not entirely the fault of the Weimar Government. It brought the price of a humble postage stamp to 50 billion marks, but lasted for the relatively brief period from June 1922 to November 1923, ending when a new currency, the Rentmark was introduced.