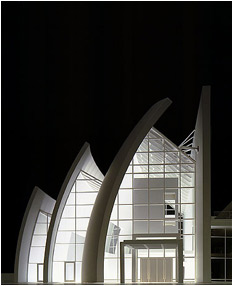 Just what we need in our Parish, a self-cleaning church!

In Rome, the ‘Dives in Misericordia’ church, designed by U.S.-based architect Richard Meier, is made of self-cleaning concrete that stays white. Meier won an international competition called by the Vicariate of Rome in 1995. Work began in 1998 and it took 5 years to build the church. Meier based his project on masterpieces of the past such as Alvar Aalto’s churches in Finland and Le Corbusier’s work in Ronchamp. Three curved sails of white cement stand out above the surrounding buildings and fields.

Italcementi, the project’s principal technical sponsor, provided innovative high tech materials for the construction of the church, including new Bianco TX Millennium white cement. “Now we have to change and think of the product not just for architectural purposes, but also for environmental purposes,” said Francesco Galimberti, spokesman for Italcementi.

In a test, the company coated 75,000 square feet of road surface on the outskirts of Milan with photocatalytic cement. It found nitrogen oxide levels were reduced by up to 60 percent, depending on weather conditions. A similar experiment in France found nitrogen oxide levels were 20 percent to 80 percent lower in a wall plastered with photocatalytic cement than one with regular cement. Encouraged by such results, the European Union last year earmarked $2.27 billion for a project to develop “smart” construction materials that would break down nitrogen oxides and other toxic substances.