In Time Andrew Sullivan wrote of the “quiet power” of British stoicism in the face of the July 2005 bombings.

Americans often react to crises with action and emotion. They see a problem and want to fix it. Brits’ reflexive instinct at such times is often calm and steady endurance. In London last week, the immediate quiet was perhaps the most striking thing-followed by an insistence on normality. [. . .] It’s not callousness or indifference to carry on as normal; it’s quiet defiance. [. . .] The English, as Orwell once observed, celebrate their freedom in small way gardening, sports, pets, pubs, stamps, crossword puzzles. Part of this is now patriotic mythology. But part is also the enculturated national DNA to see these things not as trivial but as integral to the life of a free people. These things didn’t stop, even during the Blitz, when thousands lived through night after night with the prospect of being incinerated by bombs from the sky. Part of fighting the war, the Brits realized, was military. But part was also a refusal to change a way of life, however small its detail, however petty its peeves.

[I]t seems to me we need both approaches in a war on terrorism. We need to fight back militarily when appropriate. We need boldness and aggression. But we also need to steel ourselves for casualties, for failures, for mistakes along the way. Victory in this war will be elusive and never complete. As long as some maniac wants to kill himself and others in a subway or supermarket, we will not be able to stop him. And so stoicism matters. Getting on with our lives matters. Spelling bees, college football, celebrity gossip, high school prom the simple continuance of these things is integral to the meaning of freedom.

Or so the British have long proved [. . .] [W]e could do worse than remember their stoicism. And how modestly powerful it is.

Australians were killed in London bombings. Australians have experienced the Bali bombing, the December tsunami and, at home, injury, loss of life, and heavy destruction of property from bushfire, cyclone, flood and earthquake. These, and Mr Sullivan’s essay, set me to thinking about how we respond to such things.

We are more free with our emotions than our British cousins; our culture is more mixed. Australians are quick to ‘lend a hand’ when trouble strikes. Volunteers are the life-blood of rural fire-fighting, householder emergency assistance, first-aid, lifesaving and the coastguard. Many millions are given to national assistance appeals. 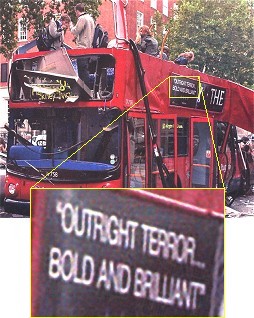 Australians have a strong ‘business as usual’ streak as well. We’ve kept much of the BritIsh defiance. We have a peculiar mixture of national pride and self-deprecation. We are quick to forget the troubles of the past and live in the present. This makes us optimistic. But sometimes, it seems to me, we lack the political will for the long haul. We make it difficult for our politicans to invest in things that will pay dividends to us and our neigbours not next year, but long into the future.

Oddspot: There was a savagely unfortunate irony in the wording of the placard advertising the movie The Descent that adorned the side of the no. 30 bus bombed in London’s Tavistock Square.