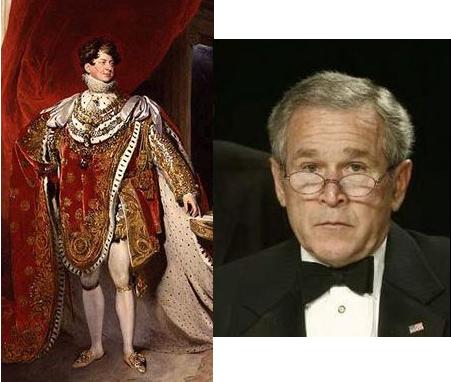 There never was an individual less regretted by his fellow-creatures than this deceased king. What eye has wept for him? What heart has heaved one throb of unmercenary sorrow? … If he ever had a friend-a devoted friend in any rank of life-we protest that the name of him or her never reached us.

The departure of George W. Bush from office was similarly unlamented. Describing Bush as “The Deluder in Chief” (7 Dec 08), The New York Times said, “We long ago gave up hope that President Bush would acknowledge his many mistakes, or show he had learned anything from them.”

Has George W. Bush been the worst president ever? … Whoever wins the race to the bottom, the Bush administration has almost certainly presided over the most egregious run of mis-governance since the British ruled North America.

At the end of a presidency of stupefying ineptitude, [Bush] has become the lamest of all possible ducks.

It is in the nature of mainstream journalism to attempt to be kind to Presidents when they are coming and going but to be fiercely skeptical in between. … Bush [at the APEC Conference] has that forlorn what-the-hell-happened? expression on his face, the one that has marked his presidency at difficult times. You never want to see the President of the United States looking like that.

So I’ve been searching for valedictory encomiums. His position on immigration was admirable and courageous; he was right about the Dubai Ports deal and about free trade in general. He spoke well, in the abstract, about the importance of freedom. He is an impeccable classicist when it comes to baseball. And that just about does it for me. I’d add the bracing moment of Bush with the bullhorn in the ruins of the World Trade Center, but that was neutered in my memory by his ridiculous, preening appearance in a flight suit on the deck of the aircraft carrier beneath the “Mission Accomplished” sign. The flight-suit image is one of the two defining moments of the Bush failure. The other is the photo of Bush staring out the window of Air Force One, helplessly viewing the destruction wrought by Hurricane Katrina. This is a presidency that has wobbled between those two poles-overweening arrogance and paralytic incompetence. …

In the end, though, it will not be the creative paralysis that defines Bush. It will be his intellectual laziness, at home and abroad. … He is less than President now, and that is appropriate. He was never very much of one.