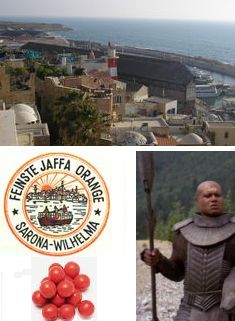 This is Jaffa, which gives its name to Jaffa oranges and to Jaffas — orange chocolate filled balls, with hard orange colored candy coating — well known to Australians and once popular at the movies.

The man, it seems, is a science fiction Jaffa.

JAFA is also the Japan Australia Friendship Association and doubtless other things as well.

But until I read Lia Pryor’s column in the(sydney)magazine, I didn’t realise that when I visited London, I was JAFA — Just Another F—king Australian.

(Apparently, in New Zealand, Jafa has long since referred to Aucklanders and Auckland is ‘Jafaland’. So when I was there, I was Jafa in Jafaland.)”