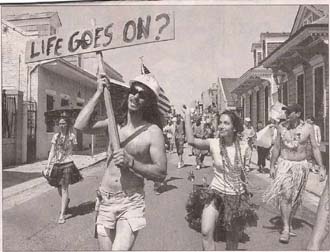 I’m not sure why the events in New Orleans have so captured my attention; bad as they are, the situation in Darfur and Niger is much, much worse, for example. Have we forgotten so easily? And maybe it’s gauche of me to notice a small sidelight amid such tragedy and high drama. But anyway …

Reports such as this, mention that amid the aftermath of hurricane Katrina a small parade behind a tattered rainbow flag made its way up Bourbon Street on Sunday, celebrating Southern Decadence. It’s normally a large event; at the same time last year, more than 110, 000 attended. The group of about two dozen people all said they lived in the largely gay French Quarter. They say they’re not about to leave. The French Quarter, the oldest neighborhood in New Orleans, sits on higher ground than most of the city and escaped the worst of the flooding. But water entered most buildings and Katrina did much damage. There is no electricity or piped water and food is short. Some of the marchers were among the poorest people of the neighborhood – the barbacks, clerks, part-time waiters and the unemployed who lived above the shops and clubs in the Quarter. The rainbow flag was taken from the front of one bar. It was ragged and worn but it had survived the hurricane. “It’s New Orleans, man. We’re going to celebrate.” one marcher said.

Nathan at Here I Stand comments, “And you know what? For all of those who want to know where God is – I don’t know where he is today, but yesterday he was parading down the French Quarter.”

Or, as Towleroad ponders, was the celebration simply disrespectful of the dead and injured and in appallingly bad taste and selfishness?

It reminds me of 2 Samuel chapter 6:

[King] David went down and brought up the ark of God from the house of Obed-Edom to the City of David with rejoicing. . . . David, wearing a linen ephod, danced before the Lord with all his might, while he and the entire house of Israel brought up the ark of the Lord with shouts and the sound of trumpets. As the ark of the Lord was entering the City of David, Michal daughter of Saul watched from a window. And when she saw King David leaping and dancing before the Lord, she despised him in her heart. . . . When David returned home to bless his household, Michal daughter of Saul came out to meet him and said, “How the king of Israel has distinguished himself today, disrobing in the sight of the slave girls of his servants as any vulgar fellow would!” David said to Michal, “It was before the Lord, who chose me rather than your father or anyone from his house when he appointed me ruler over the Lord’s people Israel-I will celebrate before the Lord. I will become even more undignified than this, and I will be humiliated in my own eyes. But by these slave girls you spoke of, I will be held in honor.” And Michal daughter of Saul had no children to the day of her death.