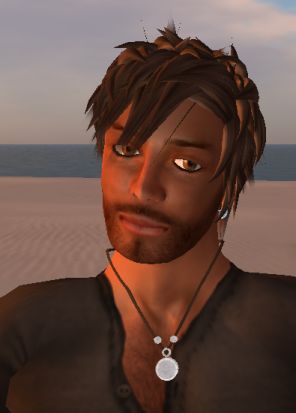 Mostly through curiosity, experimented with Second Life for a while and designed this avatar/alter ego (Aelred’s his name). But then there was little to do but spend money (which I didn’t beyond a few dollars) or move around the virtual space looking at the buildings and other often ingenious objects that people had built or made.

In “Alice’s addiction in Cyberland” (Eureka Street, 27 Jul 09) Adam McKenna worries about addiction to Second Life (SL), describing it not as an MMORPG (Massively Multiplayer Online Role Playing Game), but a “MUSH (Multi-user Shared Hallucination)—a journey down the rabbit hole in which deep vein thrombosis is not the only travail that may await the unwary.”

It seems inconceivable, but while for many users, virtual worlds—or ‘metaverses’—are merely something to dip their toes into, others fall in head first, to the extent that it pervades their waking thoughts even when they are not logged in.” SL addiction has resulted in “a frightening catalogue of neglect and self-neglect, of disintegrating families, foreclosures, relationships ruined, and businesses going belly up as a result of individuals diving too deeply into this online realm. …

[T]he fact that so many adults find themselves lost in here is perhaps more testimony to the power of the human mind, than the medium itself—after all, although in some ways is is an extraordinary creative platform, Second Life is only a kind of advanced 3D chat.

SL merely reflects forces at work in the wider developed world—the corporeal one, of flesh and bone, where time ravages our envelope of flesh, and society worships the unravaged. The tweaking of the avatar is cosmetic surgery. The lack of standard game elements such as level progression or any guiding principle becomes a void in which endless consumption becomes the goal—virtual items paid for with real money—mirroring the endless dissatisfaction coded into us by a culture predicated on instant gratification.

To build for oneself in SL requires ‘land’—which costs real money—and lots and lots of time. Chatting or socialising is difficult from Australia. Most of the SL denizens are from other time zones, asleep or at work when we are free. Vast spaces of the Second Life simulation are empty when we can visit them. Very few SL people want conversation, it seemed, just chat. SL gobbles bandwidth. So, after some interesting experimentation, and after meeting just one truly interesting person, I’m gave it the big miss.

Meanwhile, there are McKenna’s worries.

In the course of my own investigations—and like a cop infiltrating a bikie gang, at times I wasn’t sure if I was investigating or participating—I encountered a circle of avatars dancing in synch beside a blazing pixel fire at a simulated beach on an actual weekend, expressing their dismay that their teenage children were addicted to World of Warcraft (another, and even more popular MMO game). . . . The irony was perhaps lost on them.

As we continue to become ‘tools of our tools’, as Henry David Thoreau warned long ago, we risk mistaking online social networking for social capital (real ‘meatspace’ connections between people and groups of people). If this phenomenon is widespread it’s because humans are essentially social animals, and technology has changed the way we live, interact and seek to interact. It manipulates us, as much as we manipulate it.

Richard Dawkins has pointed out that Moore’s Law, which dictates that computer processing power effectively doubles every 18 months, means it is almost inevitable that coming virtual worlds will contain avatars that look like real people. This does not bode well for the future.

And in the present, sharp increases in user hours and economic activity [in SL] in the first quarter of 2009 (up 42 per cent and 65 per cent respectively over the corresponding quarter last year) perhaps indicate an influx of cyber refugees, sheltering in imaginary worlds from economic storms.

The concept of a digital life is indeed troubling, but there may be a positive side to all of this in that people seem prepared to bare their souls, safely hidden behind a pixel doll. Even if they do wear a mask, to some extent this creates an atmosphere ripe for reasoning about how to live. ‘You level-up when you quit the game’, a European legal professional and resident told me in-game, ‘by realising what you have to fix in your real life.’

Intriguingly, virtual worlds may be a means of reasoning about what is worth doing, by doing something that is perhaps not. Even so, in other cases Alice may need some help in finding her way back from Cyberland.

My appreciation of how psychologically engaging SL can become this was reinforced by a 5 Apr 07 piece in Wired, in which Regina Lynn discusses the reality of virtual rape in an environment such as Second Life. It’s not that I want to dwell on the negative aspects of the Second Life experience; quite the opposite, for Second Life has much potential for good. But Lynn’s article draws out the potential for psychological engagement with what can quickly become much more than a game.

In one sense, online sexual assault, for example, is just words and pictures—pornographic and violent, but not physical abuse. But it’s more, Lynn says, for

If you’ve never immersed yourself in online life, you might not realize the emotional availability it takes to be a regular member of an internet community. The psychological aspects of relating are magnified because the physical aspects are (mostly) removed.

That’s where Second Life can be intriguing and risky.

Even regular users might not realize how wide open they are until something drastic happens-they fall in love, get dumped, have a huge fight or get attacked in the online parallel of rape—you don’t want to lose the long-term investment you’ve made in your character. And these days, your real world income or professional reputation can depend on your online self. In a 3-D marketplace, your avatar’s name is your brand. You can change the appearance of your cartoon without much impact, but changing your name makes it too difficult for customers or clients to find you. If an online environment becomes too hostile or scary, or causes you such great anxiety you cannot work or interact with friends, more has been taken from you than your playtime. Your friends will gather around to give you emotional support-but your customers will wander off and shop elsewhere.
… The truth is, anywhere people gather, we bring all of our potential with us—for love, for sex, for community and creation, and for violence and destruction, too. That’s why we still enjoy pondering whether cybersex is real sex and whether an online affair is more or less damaging to a relationship than a physical affair. It’s a tacit acknowledgement that while the time-space continuum may change, people don’t.

No matter what costume they wear or role they play, people in Second Life remain human.