In the fiercest debate to surround the Dunmow Flitch Trials since their inception in 1104, the organisers in the small Essex town must decide whether same-sex couples may participate in the next competition, in July 2008. Apparently a local paper stirred up the debate when it asked whether gay couples are eligible to take part.

The trials, mentioned in Chaucer’s The Wife of Bath award "a flitch (side) of bacon to married couples if they can satisfy the judge and jury of six maidens and six bachelors that, in twelvemonth and a day, they have not wisht themselves unmarried again". 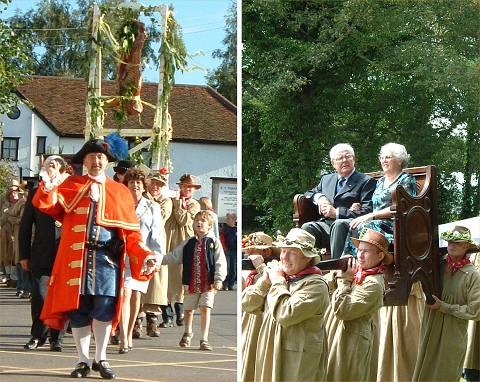 Michael Chapman, a solicitor and one of three members of the Flitch Trials Committee, supported the inclusion of gay couples following the legalisation of civil partnerships. John Murphy, a local district councillor, said the custom had already changed. "Originally, it would have been church weddings, but now it allows people who have been married before to take part." However, the Reverend David Ainge, another member of the committee, disagrees. "A civil partnership is not a marriage," he said. "The law of the land specifically says that. If civil partnership couples were allowed to enter, it would change the very foundation of the trials and require a significant re-writing of the whole event."

Since the end of WWII, the trials have been held every four years in a leap year, with the next trials are to be held in July 2016. There is a judge, counsel representing the claimants, and opposing counsel representing the donors of the flitch of bacon, a jury of six maidens and six bachelors. Claimants married for at least a year and a day come from near and far. It is not a competition between the couples. All or none could be successful in their claim, which is vigorously defended by counsel on behalf of the donors of the bacon, test the claimants evidence and to try and persuade the Jury not to grant them the flitch. Successful couples are carried shoulder high by bearers in the ancient Flitch Chair to the market place where they take an oath (similar to pre-Reformation marriage vows) kneeling on pointed stones. Unsuccessful couples have to walk behind the empty chair to the Market Place, consoled with a prize of gammon. The original custom of awarding a Flitch to those who can prove marital harmony is not unique to Dunmow, but Dunmow is unique in continuing it to today.

I think old customs like the Dunmow Flitch trial are good fun and should be retained. It seems a bit silly of a local newspaper to threaten this amusing, yet serious, ritual with PC questions about whether gays can enter.