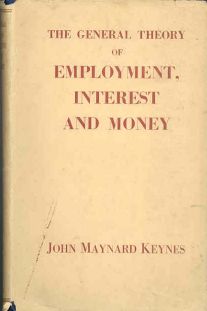 The Guardian (Editorial 9 Oct 08) is just one of many commentators to remind us that in the present financial mess we should be giving serious though once more to Keynesian macroeconomics. Monetary policy alone will not be enough. Rather than belt-tightening and the accumulation of surpluses (as in Australia) governments should be spending big, while spending responsibly or, at least, giving tax cuts. Monetary policy might then be used to limit inflation, with interest rates steady, not declining.

He was about the last person you would expect to devise an economy theory for state intervention. Educated at Eton and Cambridge, a don with a flair for making money, and a Bloomsbury group aesthete, John Maynard Keynes enjoyed nothing more than proving Victorian morality wrong. So he relished the paradox of thrift: the idea that if everyone saves at the same time, the collapse in demand drags down national income to the point where the value of what is being saved is reduced. Keynes’s greatest thinking is contained in an indigestible tome called The General Theory of Employment, Interest and Money [1935]-a title which aped Einstein’s magnum opus (modesty was not one of Keynes’s many favourable attributes). In it, he said that government action was often the only route out of recession; that insight still provides our best hope of avoiding a rerun of the Great Depression today. No intellectual was more engaged with the world of his times. After the first world war, he was a delegate to the Paris peace conference, where he predicted the trouble that would flow from the vindictive war reparations being imposed on Germany; after the second, he brokered the creation of the Bretton Woods system. His name was posthumously associated with the sloppy notion that paying ourselves ever more would lead to prosperity, but his thinking was more subtle than that. Keynes had no patience with economists who argued that everything would work out in the long run. He wrote: "In the long run we are all dead."

In the light of this, I wad glad that Prime Minister Kevin Rudd decided spend from the surplus to stave off the GFC threat to the Australian economy. This was a change of emphasis, as the Government had previously stressed the importance of a big surplus as a buffer. However the Government was forecasting a steep climb in the jobless rate.