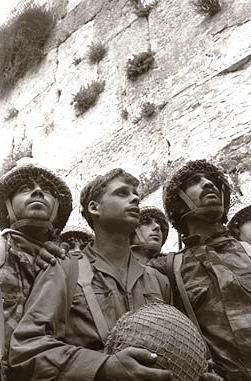 In 1967 I was a new student at Monash University where I got to know a number of Jewish students. They were heady days. The State of Israel was barely 20 years old; its opponents in the Six-day war were not the Palestinians, but the armed forces of Egypt, Syria and Jordan. There was talk among my friends of going to Israel to volunteer for the army or to work in a kibbutz. 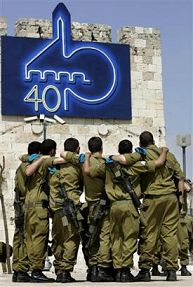 All that has gone. Even in 1967, Israel’s actions in seizing Arab territories were condemned by some more knowledgeable than me. Forty years later, my thinking and sympathies are almost entirely with the Palestinians.

Comments in Guardian’s “Comment is free” columns show the diversity of arguments now in play about Israel and the Palestinians. Emanuel Ottolenghi says that Palestine is now two failed states, that “events in Gaza must be understood for what they are: the end of Palestinian national aspirations.” Samir El Youssef argues that Fatah should let Hamas govern, that it “concede defeat and learn to become an effective democratic opposition.” Ian Black says, a little obviously, that neither Hamas nor its Fatah rival can see a quick or easy way out of this new impasse, and that it will take time for the consequences to be played out. Meanwhile, David Cox argues that, for good reasons, Israel and the Palestinians don’t want peace. “The Western efforts to resolve the Arab-Israeli dispute should be abandoned. It is not down to hand-wringing outsiders to put an end to this conflict.”

In any conflict, both parties will say they want peace. Peace, however, will usually require compromise. Sometimes the parties are prepared to engage in this. In other cases, they want peace only if the other side is prepared to comply with their demands.

Any conceivable settlement of the Arab-Israeli dispute would require the Israelis to sacrifice a substantial degree of security. It would require the Palestinians to abandon deeply cherished claims. At present, a critical mass of both communities is unwilling to make these concessions, as has been demonstrated in democratic elections in both Israel and the Palestinian territories.

In taking its stance, neither side is being unreasonable. The security concerns of the Israelis are genuine. The claims of the Palestinians are well founded. Both parties are entitled to respect for the legitimate postures they have chosen to adopt. Unfortunately, these postures make a settlement unachievable.

. . . At some point in the future, war-weariness or transformation of facts on the ground may change the sentiments of either or both of the parties. This is what happened in Northern Ireland and Bosnia. It has not yet happened in the apparently far more favourable circumstances of Cyprus. In view of the force with which both Israelis and Palestinians hold to their positions, and of the logic underpinning these positions, it is not going to happen in the Middle East in the foreseeable future.

. . . The most productive response the west can make to the deepening horrors of Palestine is to dissolve the Quartet, tear up the road map and leave the contenders to shape their own destiny.

I’m inclined to agree, although others, this time Hillel Schenker, argue well for yet more intimate Western involvement. And what of Syria’s role asks yet another commentator, Ghayth Armanazi.

As another Guardian commenter, Seth Freedman, says, the Israeli authorities’ commitment to forging peace with their neighbours is undermined by the approval they give to settler protests in the West Bank. Josh Freedman Berthoud notes that the settlement disputes have ancient roots in Jacob and Esau. “West Bank settlers are re-enacting a Bible story in which there is no hope of peace with their neighbours.” Similarly, Josh Freedman Berthoud says that “In the face of government indecision, 450,000 Jewish settlers have taken over the driving seat.” 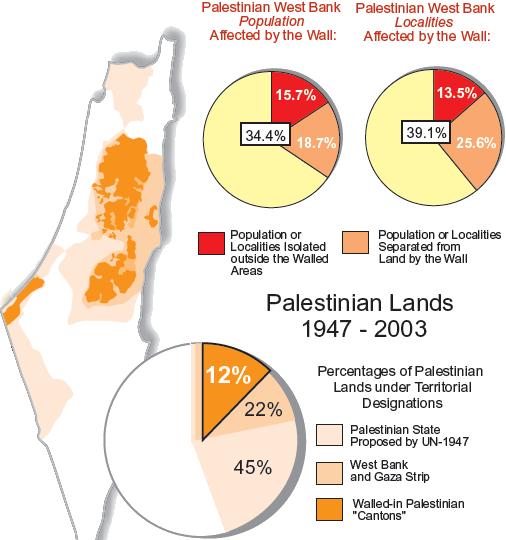 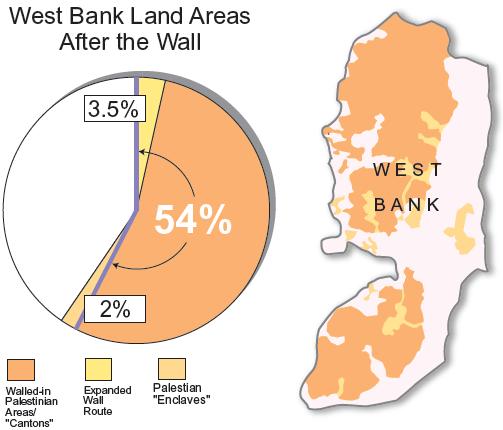 My concern is that, so far, it is the Palestinians who have had to make all the ‘compromises’. Over nearly sixty years, Israel has, largely illegally, taken ever larger swathes of Palestinian land, as a glance at some maps from PASSIA will show.

These are extracts from an inset to The Wall in the West Bank, a map produced by Palestine Land Development Information Systems (PALDIS) for the Palestinian Environmental NGOs Network (PENGON). The full map is an insert in the PENGON publication: The Wall in Palestine: Facts, Testimonies,Analysis and can be downloaded from here.

Ronald Regan in his famed speech at the Brandenberg Gate said “Mr Gorbachev, tear down this wall!”.