Browsing around I came across this piece by John Elder in The Age of 27 Mar 05, about a Good Friday service at City Life Church in Wantirna South in Melbourne. Under its former names, Waverley Christian Fellowship and Waverley Mission, it was my home church for 21 years before I came to Canberra in 1986. It’s changed, of course. 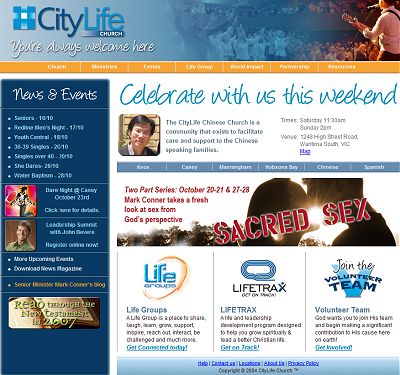 When I joined in the 1960s, there were only about 50-60 people, led by Revd Richard Holland. When I lefr in 1986, there were 600-700 members of all ages, including many university students whom I helped pastor.

A young crowd sings their praise of God at the City Life church in Wantirna South. There is no sedating hum of an organ as the congregation files in, no candle flames or sad-eyed statues to reflect upon. Instead, a wooden cross has been draped with a white cloth and set on stage amid the musical instruments-abandoned for the moment-while hard-driving mood music plays in the background, one of those mindlessly pleasant tunes with widdly guitars and synthesisers, as found in skiing documentaries and cinema advertising.

Everything is pleasant and upbeat at City Life church in Wantirna South. There’s a buzz. When Senior Pastor Mark Conner takes to the stage to welcome the 2500 people-in the main hall, the balcony and in the overflow rooms-he uses words like "tremendous" and "excellent" when the crowd show their enthusiasm. When the band starts up, the songs have a very happy feel to them-even as they celebrate and give thanks for Christ’s ordeal.

"I’m so glad you came to save us," goes one line. "You took the fall … and thought of me above all," goes another. This is a Good Friday, when everything is good indeed. Jesus died, but he died for us. Jesus suffered, but he thought of us at the time.

A small sampling of the faithful-many having converted from traditional churches and other religions such as Buddhism and Hinduism-suggests that a sense of "relevance" is behind the growing popularity of Pentecostal style of worship in Australia.

"It feels more relevant," says Kevin Russell who, with his wife, Jenny, converted from the Anglican Church nine years ago. "We feel we have the opportunity to know God more closely," he says. Says Leigh, a former Vietnamese refugee: "I get more out of it than I did from Buddhism … which is more a philosophical thing, about ideas … this is very real." And Carl is a long-time Catholic who came to crave more than "symbols … and rituals".

The Good Friday service doesn’t feature such Pentecostal practices as talking in tongues-although they are a feature at smaller, home-based meetings-but follows a simple formula of songs and "a message", rather than a sermon.

The message, too—delivered by Conner’s wife, Nicole—serves to make the Easter story personally relevant to the gathering. Her approach is fresh and interesting, her delivery vigorous without being overly showy-the theme being Christ’s last words. She suggests that "My father, why have you forsaken me?" represents the moment that Jesus was separated from the undiluted goodness and purity of God to suffer as a human. In the desperate agony of "It is finished", Nicole suggests that Christ is declaring the bitter part of salvation is now done-in tandem with his last mortal breath. She makes the comparison to four unfinished statues by Michelangelo-where human forms are in seeming torment as they remain half-emerged from the stone. And just as the statues need their maker to complete the job, man requires his maker to free him from the bondage of sin through the agency of forgiveness.

Another song or two, a synchronised communion-crackers and juice, and it’s all over, with much laughter and chatter at the exits. "We believe it’s a sin for church to be boring," says Mark Conner.

Amen to that. It’s just that, now, I find differing things to be boring or interesting than I did 21 years ago.