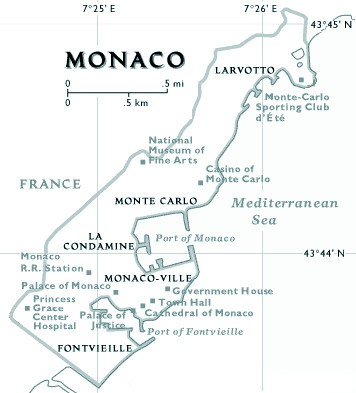 I took note of the funeral of His Serene Highness Ranier III, Sovereign Prince of Monaco.

I mention this because I remember a school English class where each student gave a short talk on whatever topic we chose. I had been fascinated by a National Geographic article on Monaco (“Miniature Monaco” by Donna and Gilbert Grosvenor, April 1963, pp. 546-573), so the Principality became the topic of a tale of the swashbuckling Grimaldi family and their fairytale kingdom. Well the truth is a little less romantic, perhaps. The most pressing challenge for the new Prince, Albert II has been to control unsavoury money laundering without emasculating his country’s banking system and driving away legitimate profitable investors.

I like well-made maps, such as this example from National Geographic, which I’ve edited to squeeze into the page.

The world’s micro-states are interesting studies in success and failure. Some of the smallest are prospering (Monaco, San Marino), including some that are autonomous territories of large countries (Gibraltar, UK), Norfolk Island, Australia). Nauru, on the other hand, formerly an Australian/UK/NZ Trust territory, has been a lamentable failure. About 13,000 people share a mere 21 sq km of (largely unproductive) land. But at independence there were large cash reserves from phosphate mining royalties. Too much has been frittered away by poor investment, corruption, carpetbaggers and mismanagement.

The Vatican is the fully independent country that has the smallest citizenship, about 960. Almost all were born outside the Vatican. Well, I guess they don’t make a lot of babies.