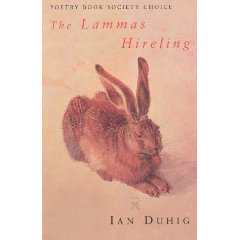 After the fair, I’d still a light heart
and a heavy purse, he struck so cheap.
And cattle doted on him: in his time
mine only dropped heifers, fat as cream.
Yields doubled. I grew fond of company
that knew when to shut up. Then one night,

disturbed from dreams of my dear late wife,
I hunted down her torn voice to his pale form.
Stock-still in the light from the dark lantern,
stark-naked but for one bloody boot of fox-trap,
I knew him a warlock, a cow with leather horns.
To go into the hare gets you muckle sorrow,

the wisdom runs, muckle care. I levelled
and blew the small hour through his heart.
The moon came out. By its yellow witness
I saw him fur over like a stone mossing.
His lovely head thinned. His top lip gathered.
His eyes rose like bread. I carried him

in a sack that grew lighter at every step
and dropped him from a bridge. There was no
splash. Now my herd’s elf-shot. I don’t dream
but spend my nights casting ball from half-crowns
and my days here. Bless me Father for I have sinned.
It has been an hour since my last confession.
—Ian Duhig, The Lammas Hireling

I like good poetry, but one of my pet peeves is impenetrable poetry that refuses to yield up meaning even to the so-called intelligent reader. Duhig’s “The Lammas Hireling” may well have won prestigious prizes, but it made no sense to me until Wikipedia informed me that, in some English-speaking countries in the Northern Hemisphere, 1 August is Lammas Day (loaf-mass day), the festival of the first wheat harvest of the year. On this day it was customary to bring to church a loaf made from the new crop. In many parts of England, tenants were bound to present freshly harvested wheat to their landlords on or before the first day of August. In the Anglo-Saxon Chronicle, it is called “the feast of first fruits”. In England and Scotland, Lammas was one of the Medieval quarter days, the four days dividing the legal year, when rent and interest on loans, and ministers’ stipends were due, contracts and leases would begin or end and when servants were hired and paid. Hence, The Lammas Hireling.