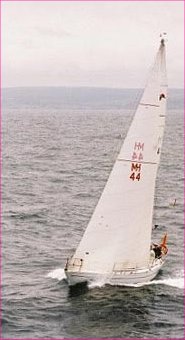 The 9.7 metre Pittwater-based Canberra Yacht Club boat Gillawa was last across the line in the 2005 Sydney-Hobart yacht race, taking 7 days, 10 hours and 23 and 57 seconds at an average of 3.5 knots for 80th and last position. Among her crew was my workmate, Janine Frawley, who told us about it. It was Janine’s second blue-water race as she completed her first-ever sailing race with the boat in the Gosford to Lord Howe Island Race.

On corrected (handicap) time Gillawa made the journey in 6 days 2 hours 17 minutes 14 seconds at an average of 4.3 knots for 20th position—not too shabby.

David Kent has restored Gillawa as a training vessel to give Canberra sailors the chance to sail beyond the confines of Lake Burley Griffin. A news report on the race website tells the story.

Dave Kent is certainly one of those have-a-go heroes for whom the sheer experience of getting to Hobart is everything. There are no Olympic sailors on board his 32-footer Gillawa. Instead, Kent invites sailing rookies to join him in the adventure of a lifetime. […] Gillawa is all about giving people a go, it doesn’t matter whether they’re good, bad or indifferent. Just give them an opportunity.” […]

The previous year Gillawa was also last into Hobart, and by some margin. In fact, most of the boats had arrived, had their parties, and had already gone home by the time Kent and his merry band crossed the finish line. They arrived some seven days, 18 hours and 23 minutes after the start gun had fired in Sydney, but then there were 57 yachts that never made it to Hobart at all, some of the biggest maxis included. That year Kent kept crew morale high through the vicious Bass Strait, with some well-timed humour. “When we heard Skandia had fallen over after her keel broke off, I said: ‘Well, we’ve pushed them beyond the limit. Who’s next?'”

The Gillawa achieved a PB—a personal best—and got a rousing welcome when it reached Hobart, even though it was late at night.

But if you are resigned to coming last in a race, why race at all? Why not just go on a 600-mile cruise instead? “The answer to that is simple,” Kent answers. “If you want to be recognised not just as a sailor, but as part of this small, elite group that can say, ‘Yes, I’ve done a Sydney Hobart,’ then suddenly people will say, ‘Wow, you are a sailor.’ Now you might not be much of a sailor at all, you might just be using your muscle to wind a winch and might never have sailed before. But it has a huge attraction, the Rolex Sydney Hobart. When someone has done one of these races, they feel like they have really achieved something. There are many other races around, but this race has a special name for itself.”