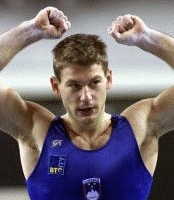 The spectacular finals of the 2005 Artistic Gymnastics World Championships were held in Melbourne last night and shown live on Australian Televison. 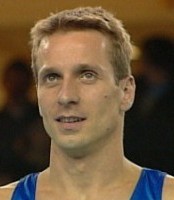 For me, the highlights were the near-miraculous skills of Slovenians Mitja Petkovsek (right) and Aljaz Pegan (left).

In the men’s parallel bars, Petkovsek was the gold medalist with a score of 9.700 ahead of defending world champion Li Xiao-Peng of China (9.675) and France’s Yann Cucherat (9.662).
In the men’s horizontal bar, Pegan’s routine drew gasps from the Melbourne spectators and from me at home as well. He won with 9.662, while Cucherat was second (9.650) and Ukraine’s Valeri Goncharov was third (9.637)