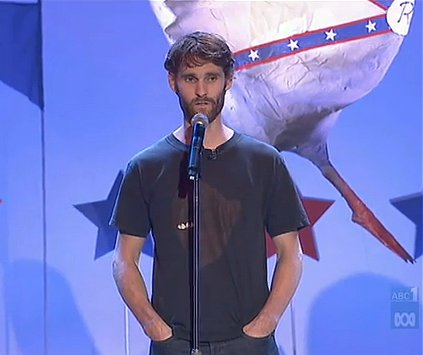 I saw the television broadcast of the final of the 2010 RAW Comedy Grand Final, held in Melbourne in April.

The first of the 13 contestants was Luke Heggie. He simply stood at the microphone with his hands in his pockets and reeled out one liners, with that one essential requirement for a comedy show—he was funny. The funniest in fact; he won the competition. I agree with the judges who said that Luke was a much deserving winner, with many jokes in his five minute spot. I and they liked his laid back style. Mr Heggie won a trip to compete in the Edinburgh Fringe Festival.

One of two special mentions went to Ronny Chieng who was funny most of the time.

Other than that, it was pretty much down hill all the way. Problem was, most of the other contestants weren’t very funny at all, and most were boringly rude or crude (sigh). I didn’t laugh. And these were the best of hundreds of entrants?