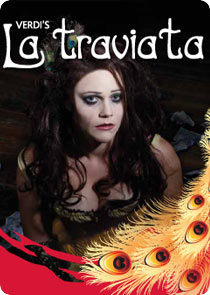 We saw Oz Opera’s 2010 production of Verdi’s La Traviata at the Canberra Theatre. It was the very last of about 64 performances in a long tour of the show to remote, regional and suburban centres.

The performance warmed up as it went along. It was almost as if the singers’ voices were not fully prepared at the start. I knew the plot well beforehand and followed the story easily. But I barely understood half-a-dozen of the sung words despite them being apparently in English. The cavernous Canberra Theatre swallowed up this production, which was better suited to a smaller venue with more supportive acoustics. We were in the twelfth row, yet to me the singing lacked volume. The Australian‘s review of a performance of the production in Melbourne shows Canberra was not alone in this difficulty. “Rachel McDonald’s direction became a bit obscure at times and despite the Clocktower Centre’s excellent acoustic, the audience had ongoing difficulties understanding the text. This is a serious problem for a show that is essentially being staged for new audiences.”

Nonetheless, Annabelle Chaffey was very pleasant to hear and tuneful as Violetta and bass Benjamin Rasheed the best of all as a strong and clear Gaston. Directed by Simon Thew, the chamber orchestra of just eleven players-a quartet of strings, some woodwinds, two horns and a keyboard-played the imaginative orchestral reduction by Andrew Greene superbly and for their numbers made a robust sound.

The set, an oval metal art nouveau gazebo, was a symbolic and literal cage. It had to be robust and simple to withstand much packing and unpacking on tour. Yet looking at essentially the same thing through the entire performance was tedious. As well each each character had just one costume which, for Alfredo, was worn in scenes spread over several months of story. A change of clothes would have been more convincing in the portrayal of a wealthy heir.

It was a pleasant entertainment, but underwhelming. We enjoyed our evening and, yes, opera is expensive but, at $75 a ticket, we barely got our money’s worth and were disappointed.