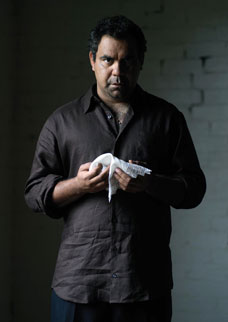 Directed by Marion Potts, Wayne Blair leads as Othello with Leeanna Walsman as Desdemona and Marcus Graham as Iago. All were good, but I thought Graham’s Iago was the standout performance. He made Iago amoral, witty and totally self-interested, but not a loathsome, overplayed, incarnation of all that is evil.

Blair is the first Australian Aboriginal actor to take the lead in a major production of Othello in Australia and it’s a risky role. I wasn’t completely convinced by his portrayal, as I thought the lordly leader would have had more gravitas that Blair gave to his Othello.

I’m not a great playgoer, but this show revived my interest in Shakespeare. 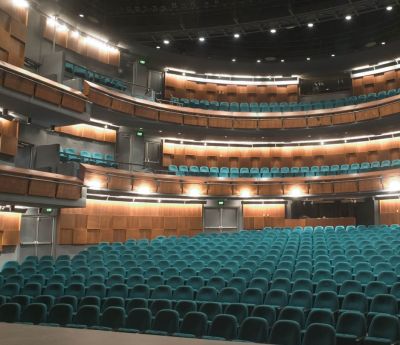 The newly rebuilt Playhouse is interesting, too. With its cylindrial shape, high, shallow balconies, and not-too-many seats, it suits its purpose well.

When this production of “Othello” hit the stage of the Playhouse for its Australian premiere I was worried. Very worried. It seemed that the actors were nervous. Very nervous.

Well-known Aussie actor Marcus Graham, playing the villainous Iago, took to the stage for the opening scene with Roderigo, played by Mitchell. Butel, and I felt like they were over-playing their roles.

But within 20 minutes everyone on stage had settled down into a much better theatrical rhythm … a rhythm required to keep this compelling Shakespeare work alive and bring the audience with them. … Othello [is] played wonderfully by indigenous actor Wayne Blair … The first half was messy. Unnecessary movements by actors and what seemed to be bad lighting choices made it hard for the audience to connect properly with the production. Whilst Marcus Graham steadily ramped up his evil character, those around him, including Wayne Blair, seemed to be left in the wake of his performance. Thank goodness for intervals, because after the break, it was like a different production: The play moved with a pace and dramatic intensity.

All the actors are good here, but there are some outstanding performances from a few worth noting. Graham is the best Iago seen on an Australian stage bringing a modern, smooth feel to his evil portrayal. The “Clown” played by Chris Ryan is expressive and funny, and provides a stark contrast to the rest of the cast, while Iago’s wife Emilia is beautifully and sensitively portrayed by the wonderful Anni Finsterer. The rest of cast does a commendable job.

Doubtless the cast in this production will pick up their act a little more in the first half as the season progresses. As and audience member, it’s always good to remember that patience is a virtue, and if you have faith in that patience, it will pay off for you by the end of Bell’s Othello.