In the BBC’s Thought for the Day, 29 March 2005, Rev Dr Alan Billings observed that “In the past, and until relatively recently, the faith of non-attending, or not attending very often, Christians was supported by the general culture.”

If you went into an art gallery and immersed yourself in painting and sculpture, you would inevitably be influenced by biblical religion, since the history of art in western Europe has in large measure also been the history of Christian art. […] But religious themes are rarer in contemporary art and those who prepare catalogues for exhibitions now find themselves having to explain religious references in more detail.

The same goes for music, Billings says, and even for eating.

Seeing salvation, singing salvation – even eating salvation. Until recently, the story of Christ was called to mind with seasonal food—mince pies, simnel cake, hot cross buns and Easter eggs. But my local supermarket now stocks mince pies and hot cross buns out of season and Easter eggs have transformed into a generally available cream egg. What this means is that those whose Christianity has been sustained and nourished culturally – the cultural Christians – need to wake up to what is happening.

I think this is important. Whatever our faith, our life and testimony are richer and more fun if we express them culturally, in every day life as well as so-called ‘high-culture’. A book I have loved for years is Hidden art by Edith Schaeffer (1972). It has been much commended to ‘Christian homemakers’: well, yes, but only if that includes singles and couples, men and women of all ages, living anywhere and with anyone. Schaeffer argues for simple artistry in everyday things, discovering the God-given creativity that is part of our being. She gives ideas and advice on music, writing, interior decoration, gardening, food, clothes and more. In all of these, we can bring joy to ourselves and each other. Don’t buy Easter eggs, or greeting cards, make them! 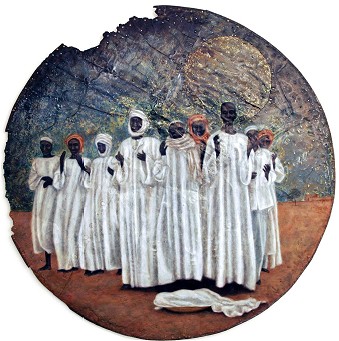 In the fine arts, a superb, though sometimes controversial, Australian example of faith expressed in culture is the Blake prize for religious art. The 2004 prize was given for this work, Pieta (Darfur) by © AñA Wojak. “The men depicted,” she says, ” are mourning a child that has died of malnutrition in the refugee camps of Dafur. It was inspired by press coverage of the ongoing war in Western Sudan. Amidst the horror and despair, this is a moment of dignity and prayer.”

Of course the religious music scene is enormous, especially on the rock/pop side. Interesting to me is the growing use of jazz in Christian worship in Australia. The ABC’s Encounter program did a fascinating feature on this. There is a transcript and a web page God, Church and All That Jazz: a brief history from an Australian perspective, by Bill Haesler.