(After I had preached this sermon, one of the church people said it reminded her of the painting (above) painting she saw in England, Christ at the pool of Bethesda, by Edward Burra. She had noticed that in middle of all the action and detail in the picture, Jesus is seen at one side, unobtrusively healing the paralysed man.) 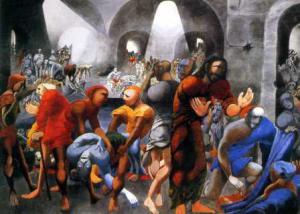