My great-grandfather, Donald McKinlay was born on 17 Feb 1840 at Helensborough, Dunbartonshire. In about 1865 Donald migrated from Scotland to New Zealand. An unconfirmed family report dates his arrival at 5 Jan 1865 on board S.S. Aboukir.

He marriedMargaret Muir, daughter of John Muir and Mary Ann Young, on 23 Aug 1866 at Wangaloa, New Zealand. The marriage was conducted by the Reverend James Kirkland. They became the parents of Alexander Mitchell McKinlay, my paternal grandfather, who was born in Caversham, New Zealand on 10 August 1888.

Donald also went by the name of Dan. This is often the custom as Daniel and Donald were seen as interchangable names in early Scots society. 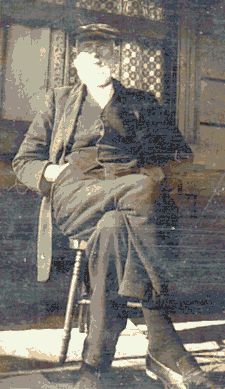 After their marriage, Donald and Margaret lived for a time at Wangaloa in Otago. Donald was a carpenter and building contractor. Together with his wife or her parents he owned an interest in "McKinlay & Muir Sawmillers". He built the Bridge Hotel in 1878 and the shell of the first Presbyterian church at Kaitanangata in 1863. The second church was built under Donald’s supervision in 1877 but was pulled down in about 1980. The records show that Donald owned land in Kiatangata and in Caversham). A further piece was owned jointly with his brother James. The total value £760 was an appreciable sum.
In New Zealand, Donald was actively engaged in civic life. He served on the Inchclutha Road Board and supported local sporting activities. The local newspaper records his donation of a set of swingle trees as a prize at a district ploughing match. Donald was elected to the committee of a newly formed temperance society in 1871 and began military service on 29 Oct 1874 as a Lieutenant in the NZ Militia.

A year or two after the birth of Alexander, Donald and Margaret moved to Australia. We don’t know why they decided to leave New Zealand. For a time, Donald was a manager of a gas works and he had connections with the supply of gas in Kyneton Victoria (where my grandfather became a champion footballer).

Donald lived with his son Alex in the closing years of his life and died on 13 Dec 1926 in the Melbourne Benevolent Asylum at age 86 (Death Certificate 13351) of senile decay and heart failure—three weeks before my father’s fourth birthday—and was buried on 13 Dec 1926 at Cheltenham Cemetery.