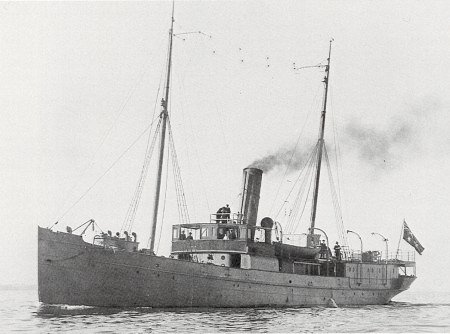 This is the Lady Loch a 487 ton steam vessel built in Melbourne by Campbell, Sloss & McCann in 1886 for the Department of Trade & Customs of the colonial government of Victoria, and named for the wife of the colony’s Governor. HMVS Lady Loch was also the colony’s largest fleet auxiliary vessel, armed with a 6 inch gun and two 1 inch Nordenfelt guns.

The Lady Loch was used by Victoria as a lighthouse tender. With federation, care of some lighthouses was transferred to the Commonwealth and in 1915 Lady Loch was chartered by the Commonwealth. The Commonwealth bought the vessel in 1917 for £9,050 less the charter money already paid. Lady Loch was then sold in Feb. 1920 to a grazier, A.S.Rodgers, but when the Commonwealth required more tonnage to care for lights under its control it repurchased Lady Loch in May 1925. The ship was sold again, in March 1935 to a Mr Cook, converted into a hulk for work on the Brisbane river, and used by Moreton Tug & Lighter Company, finally to be scuttled at Dunwich, Moreton Bay in 1962.

All this interests me because I’ve seen a few comments suggesting that my great-grandfather John Slater Anderson (father of my paternal grandmother Christina Elizabeth) was among those who built the Lady Loch.

The Australian War Memorial has a small picture of HMVS Lady Loch painted in Melbourne c.1896-1901 by William Nicholls Anderson (1873-1927). Was he, I wonder, a relative of my ancestor?

Gail: Brian, I, too. am a descendant of John Slater Anderson and I know that he designed and built the Lady Loch because I have a copy of the plans which he signed. I am at present researching her history. She was a significant ship in Victoria’s history, completing many rescues from ship wrecks. Her anchor is mounted on a street in Canberra outside the Department of Public Works.

Wendy: I think, i am too, a descendant of John Anderson. I have done some research and have found that my great grandfather Thomas Langford worked on this boat and Mystery before taking over as skipper of Secret in 1895. He and his brothers owned a boat building shed at Blues Point.

Sue Fisher: Hi, just looking up the ship ‘Lady Loch’ in relation to King Island were her name keeps popping up regarding a field nats. trip 1887, the historical society would be most interested in any info regarding her, I am the research officer for them.