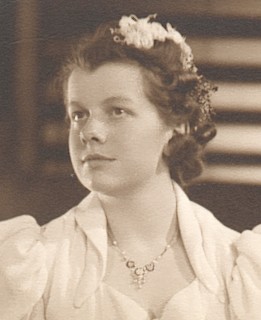 My mother June was born at home on 31 May 1922 in Edithvale, Victoria. She was the elder daughter of William and Frances Judith Hitchcock — Bill and Judy. Her sister was Nanette, now Naneine.

Early in June’s childhood they lived in rural New South Wales to farm wheat. It was a tough life, with drought and economic depression. They moved to Geelong in Victoria when she was in high school.

This picture at right was taken at her debutante ball in the 1930s.

June finished school a couple of years before World War II and took up office work. 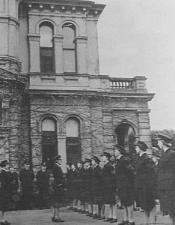 Approximately 27,000 women enlisted in the WAAAF between 15 March 1941 and 24 August 1945. When it first began, there was an especially urgent need for telegraphers. Aircraftwoman June Norton Hitchcock enlisted on 8 April 1942. She trained as a Morse telegraphist at the RAAF Radio School in Melbourne and served at the HQ Wireless Transmitting Station “Frognall”(pictured) in Canterbury, a suburb of Melbourne. 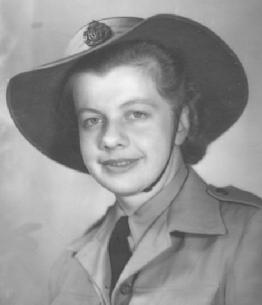 This is the only photo I have of her in uniform. She didn’t like this picture as she was ill with mumps when it was taken!

Later, June was posted to the RAAF base at Tocumwal in Central Southern New South Wales.

It was during this period that my mother was stationed there as radio-telegrapher and telephonist. June was at Tocumwal when she was discharged from the WAAAF on 29 Nov 1945. She was awarded the War Medal 1939-45 and the Australian Service Medal 1939-45. 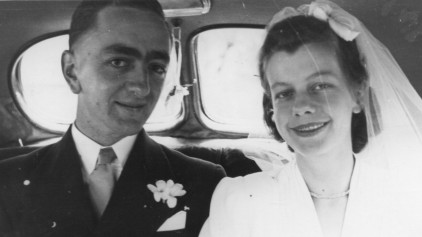 June and John met as the war was ending; she called him ‘Mac’. They were married on 7 Dec 1946 at All Saints’ Church in Newtown, Geelong, and honeymooned in Tasmania. That was the only time in her life that June travelled by air.

John and June’s first son, me, was born in 1948 while John was studying to become a primary teacher. Robin followed in 1951. Two daughters came some time later, Pauline, and Noella Ann, their last child, who died at birth. 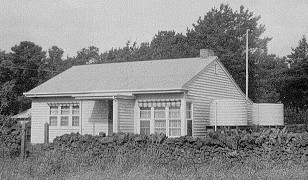 John’s career meant that, as well as living in the city they spent enjoyable but challenging years at bush schools in theWestern District of Victoria. June kept house in the teacher’s cottage adjoining the school where John taught, such as this home in Pomborneit North, a tiny hamlet on the Princes Highway between Colac and Camperdown, where we lived from 1957 to 1959.  Later, they lived for some time in Frankston, Upper Fern Tree Gully, Surry Hills, and in Mooroopna and Morwell, where Dad held senior positions. All in all, there was a fair bit of moving about and turning of houses into homes – which June did brilliantly.

At the conclusion of John’s career, they retired to the South Coast of New South Wales and then moved to Albury about 1994. Albury was a good place for them.

June was a Christian all her life, building on foundations she learned from her mother, Judith, who was a strong Christian and life-long Anglican. Encouraged by a friend and colleague of John’s, in 1961 June and John joined a church in Frankston Victoria where they were refreshed in their Christian faith and filled with God’s Spirit. From then on, they were much involved in church life, Christian friendship and ministry. June loved worship, prayer and singing.

One of my strongest impressions of my parents is that they were a true partnership. They shared together in John’s teaching career and their life in the church.  I can remember long conversations in the kitchen at home:

– about the doings of the day,

– about the next move in Dad’s career,

– about the best way to make the church a place of life and blessing;

– and about what was best for us all. 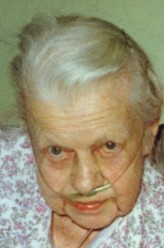 Even in their final months together, June and John took on her hospitalisation as a challenge to be shared together.

June was a wonderful listener, and always good to talk with. Even in her last years, when she was usually not able to talk for a long time, she would listen powerfully to what we had to share and often had something keen-witted but kind to say. She didn’t laugh much, but smiled a lot, was very witty and amusing to talk with and to be with.

June was a great letter writer (until the telephone took over). In the seventies, I spent two years overseas and there was a steady stream of nourishing letters from Mum at home. When we lived in the bush in the 50’s, Mum would read to me parts of the letters that flowed back and forth between her and each of my Grandmas.

On holidays and early in their retirement, my parents traveled about by car and caravan.

This is the last picture taken of her – on Christmas Day 2003. Most of her life, June had to cope with painful health problems. Sometimes it was difficult for her get out and about much. Perhaps to the outsider, her life may have seemed a simple one. But those of us closer to her caught glimpses of her inner being. In her spirit, June was an adventurer, searching to know more of this beautiful world and its Creator—a person with many gifts that she used to encourage and bless others. She died on 2nd August 2004. 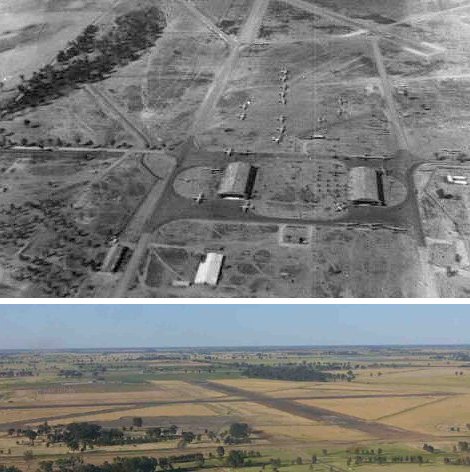 The Tocumwal base has an interesting history, told well in “A story of the war years at Tocumwal Aerodrome” by Bob Brown. Early in the war, concerned that northern Australia was vulnerable to the Japanese, the Government concentrated its resources in the south. Lest only the south-east could be kept from enemy hands, airfields were required in the south from which to defend against a Japanese advance. Tocomwal, on the NSW/Victoria border near the Newell Highway, was selected because of its flat, open terrain, long distance from the coast and good infrastructure. In February 1942, land and buildings were summarily requisitioned from the farming community. In just five weeks, a massive construction effort completed runaways for a heavy bomber base for the US Army Air Force, called McIntyre Field. The base originally covered an area of about 25 miles square and was home to squadrons of Liberators and a number of small aircraft. It was also a vast aircraft storage and repair depot.

There were four runways a mile in length, miles of taxiways and roads, hundreds of buildings and a large air force hospital — all well dipersed and disguised. After £3 million worth of work, by late 1942 the base was ready to respond to the enemy’s expected invasion. Thousands of US personnel and up to 4,500 RAAF men and 400 women of the WAAAF were stationed there.

But in May 1942, Japan’s advance toward Australia was halted in the Battle of the Coral Sea. The US Air Force left Tocomwal, to establish another base at Townsville in Queensland. The RAAF took over operation of the airfield in 1942 and named it Tocumwal. It became a large aircraft maintenance and storage depot and a bomber training base.