My great-great-uncle Robert McKinlay (eldest brother of my great grandfather, Donald) sailed from Scotland on 12th October 1860, with his wife Euphemia (neé Buchanan) and their first-born child, Mary, then only about 10 days old. The sailed to New Zealand on the maiden voyage of the newly-launched Lady Egidia.

An article in the Ardrossan Herald of Saturday, September 8, 1860 describes the launch of the Lady Egidia a few days before. You can read the article here. The Lady Egidia was one of the largest wooden vessels ever built in Scotland. This rather battered photograph was taken a few years later (click it to enlarge). 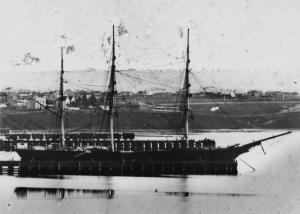 Lady Egidia was advertised to sail for Otago on 10th October. As the launch and departure days approached, people arrived from throughout Scotland and Northern Ireland seeking passage to New Zealand. In all, 438 passengers boarded. Among the 58 married couples—137 men and 70 women—their occupations were given as 40 labourers, 31 ploughmen , 22 carpenters, 17 shepherds and 50 domestics.

Flags were flown and hundreds of spectators watched the departure, headed by the Earl and Countess of Eglinton and their daughter Lady Egidia, after whom the ship was named. The ship sailed from the Tail of the Bank at Greenock on 12th October 1860, for a voyage to Otago that was to take 108 days, arriving on 28 January 1861.

The personal diaries of passengers illustrate the long and tedious journey and some of the hardships that could afflict passengers on sea journeys in the 1860s. You can read some extracts.

The 106 day voyage was sad time for some of those on board; thirty children and two adults died, mainly from diarrhoea, but a few of those thirty deaths were from pneumonia. Several families lost two children, one family, lost all three of their children.

There were complaints made of the Medical Officer aboard ship, but in the light of modern medical knowledge it is considered unfair to cast blame on him. This trouble was no doubt caused by an epidemic of which doctors had no remedy at all in those days, and no matter how good and efficient he may have been, he would have been powerless to to do anything to combat this scourge.

The “Lady Egidia” anchored outside the Port Chalmers heads at 8.30 pm on 26 January 1861 and was towed up to Port Chalmers by the Geelong, and anchored at 5am on 28 January.

The arrival of such a ship, carrying many settlers was important news. The Otago Witness published a substantial article about the ship, the voyage and the settlers.

It was said that the 400 passengers from the Lady Egidia, were the largest number of settlers to arrive at one time to seek their fortune in this new and promising land.

Fiftieth anniversary celebrations of the voyage were held in 1911 and Robert McKinlay was photographed among those attending the celebration.

In 1961 the centennial was celebrated in Dunedin by descendants of the people who arrived in Otago on 28th January 1861. These sentiments were printed on the forepage of the Centential Committee’s booklet The Voyage of the Lady Egidia, which included accounts of the voyage from the surviving diaries of life aboard ship.

Remember our fore fathers, who because of the exigency of the times, embarked on this adventure bound for a strange and little known land They not only bettered their own circumstances, but those of all their descendants as well. Give a thought to them sometimes, and compare the lot of the early pioneers of the 1860s with the present easy going conditions available to us.

The story was retold in the 1970s in an article in the Ardrossan and Saltcoats Herald.