The Pittsburg Post Gazette is marked the fiftieth anniversary of Jonas Salk’s anti-polio vaccine with an fine series of articles including historical materials and reports on current progress toward elimination of polio.

Polio is now a serious problem in only a few countries, particularly where there is war, poverty or trouble that makes delivery of large scale vaccination difficult. But it is once again on the increase in those places, having been eliminated in the Americas and the Western Pacific, for example. Vaccine will be required for decades, as polio can be dormant for years and regions need to be ready to contain outbreaks that can occur haphazardly. The World Health Organisation and UNICEF have a Polio eradication website with up to date information. Rotary International has also made a huge contribution.

This picture was taken of me a few months after I had had a serious fever. It was to be years later, after my legs had failed to grow to the same length as each other and I began to limp, that pioneering polio specialist Dr Dame Jean Macnamarra DBE was able to tell my worried parents that I had had polio. 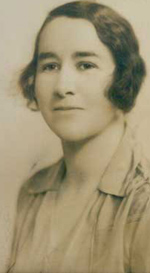 She became particularly interested in physical methods of treatment, developing them for use in her own practice. Splints and various other strange looking contraptions were used to immobilise limbs and protect muscles from damage. Years of corrective therapy followed with the patient’s whole family encouraged to play a part. Macnamara continued her work with polio sufferers for the rest of her life, forming close relationships with many of the families.

While I was a child there were splints and calipers, a special chair and a long woolly stocking I wore on my left leg to encourage it to grow faster, while the other leg stuck out in the cold from my shorts! The treatment was helpful, though by the time I was a teenager no more treatment was possible, even though some effects remained. I have been much better off than many who have experienced polio, especially as I can walk reasonably normally, but it has caused some problem or other almost every day of my life. Some people experience post-polio syndrome forty or more years after the initial illness, but so far I’ve had few limited problems.