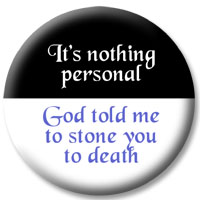 In 2005 United Nations special rapporteur on arbitrary executions, Philip Alston, has called for an immediate review of the process that led to a man in Northern Nigeria being sentenced to death under Islamic Sharia law after admitting to homosexual sex. The man had been accused of having sex with a much younger man and was acquitted of that charge. But after the judge asked him if he had previously had homosexual sex, the man said yes. The judge then sentenced him to be stoned to death.

In an Presidential Address to the General Synod of the Church of England, Archbishop Rowan Williams said that the ‘listening process’ on homosexuality set up by the Anglican Consultative Council would fail, “if it does not listen to the voices of homosexual people within the developing world, so often horrifyingly at risk of violence and persecution, just as much as it will fail if it does not listen to those churches in the developing world that are struggling with great difficulty to find a pastoral way forward that is true to their convictions and does not expose their people to real danger.”

On that basis, the ‘Listening process’ did indeed fail.

The sentencing of the Northern Nigerian gives brutal context to the cultural and pastoral dilemma faced by some African Christians concerning homosexuality. It is understandable that ordinary church members in Nigeria and elsewhere in Africa fear for their security should they be seen to be ‘soft’ on homosexuality. Memories of terrible civil war in Nigeria are not far distant. But one must oppose the imprisonment and judicial murder of gay and lesbian people. African Christians surely cannot support such things.

I have no sympathy at all for church leaders anywhere who compromise the church’s stance on justice and freedom by entangling themselves in mutually supportive power relationships with governments.

Link: Behind the Mask is an excellent information resource on gay and lesbian people in Africa.