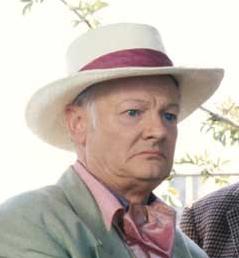 The 2007 death of John Inman was sad.
Not much has was seen of him here except his famed role in the hit TV series Are you being served? His campiness as menswear assistant Mr Humphries was ourageous for its time and criticised by some as a sterotype — but the show was funny and attracted huge ratings.
Inman and his partner of 33 years, Ron Lynch, joined together in a civil partnership in 2005, making Inman’s sexuality public after decades of ambiguity. As recently as 1999 he had insisted that he was heterosexual.
The wonderful Kenneth Williams was another actor, perhaps more successful than Inman, who rejoiced in exaggerated campery in his performances, but was apparently troubled by his sexuality.
This odd ambiguity – acting out an exaggerated ‘gayness’ in TV and theatre, and nervousness of it in real life – was perhaps a symptom of an oppressive society that now, at last, is beginning to change.
Matthew Parris in in Times Online (10 Mar 07):

I raise a salute to that lifesaving human compromise, the open secret. … For gay men in the 20th century the open secret was sometimes literally a lifesaver. It was the narrowest of territorie the half-acre that lies somewhere between absolute denial and outright confession, between dishonesty and disgrace. This was a hard place to be in 1970, a narrow line to walk. If our oh-so-modern, who-gives-a-damn, 21st-century gays, of whom I am one, suppose that these men were not brave, that they were not trail-blazers, not part of the struggle, then we don’t know the half of it.
And some of us, it seems, don’t. Already I hear the cry — "living a lie", "set back the cause", "self-oppression", "an insulting stereotype" — from a gay lobby that has taken about five minutes to forget what a dark age England was for us, what light an Inman, a Kenneth Williams, a Danny La Rue or, from America, a Liberace brought into it, and how outrageous, how valiant, those people were.
About five minutes to forget, too, that the people who wanted these men taken off the stage, screen and wireless, were not the gay-rights campaigners but the bigots and guardians of conservative morality. "Sexual perversion", they said, wasn’t entertainment: it was wicked and dangerous – and bad taste. The BBC, contemplating making a series of Are You Being Served?, tried at first to insist that Mr Humphries was removed.
How fast we forget context. Always a bit of a giggle to their own era, the Inmans, La Rues and Williamses of the last century are now disowned by their newly brave inheritor the lately and boldly Out.
John Inman’s breath had barely left his body before right-on spokesmen for that imaginary thing, the "gay community", were berating the "self-oppression" and "stereotyping" of homosexuals that Inman’s Mr Humphries helped to reinforce. His smutty innuendo, his jokes about fairies and handbags, his limp wrist, camp wit and simpering delivery are, they claim, everything we need to shed.
Yes, they are. Of course they are. They are now. But they weren’t then. Then they were a light in the dark. Between the words, these men insinuated a wordless language of their own; they made a nonverbal statement, a shyly comical way of saying: "This is who and what I am; this is my tribe — and, look, I’m famous and life is fun." …
Thus did the shame and the ghetto depart, taking with them (but slowly) the tagging and the typecasting.
We gays can shed these stereotypes because we have outgrown them, because we have won the space and public respect to dispense with prison clothes and walk out of the virtual ghettos in which gay people used to bunch for mutual affirmation. We don’t need to belong to a gang any more, to drink in the same pubs, congregate in the same occupations or dress or talk in ways designed to help us recognise each other, and help the outside world to guess without the unpleasantness of having to ask. We are no longer under siege. Everything can be talked about today. But yesterday, when things weren’t said, things had to be said without words. Men like Inman found the showbiz shorthand to do it. God rest their souls.