Thomas Merton wrote once that:

I must . . . know myself, and know both the good and the evil that are in me. It will not do to know only one and not the other: only the good, or only the evil. I must . . . be able to live the life God has given me, living it fully and fruitfully, and making good use even of the evil that is in it . . . To live well myself is my first and essential contribution to the well-being of all [humanity] . . . To live well myself means for me to know and appreciate something of the secret, the mystery in myself: that which is incommunicable, which is at once myself and not myself, at once in me and above me …

‘Coming out’ relates to what Merton called the journey from the false self toward the True Self within each person . We need to look within ourselves to find our true identity and the truth of who we each uniquely are. Being and identity are discovered on the difficult but necessary interior journey. Many never make that journey; many remain their whole lives in the fragile, unsettled position of having their identity defined for them by what they do and how others see them; their spiritual maturing and growth remains stunted; their life is always other that life God invites them to live freely, fully and fruitfully. It took a too long for me to be confident about my ‘True Self’.

Work, years ago, with the AIDS Action Council of the ACT, Inc was an early step. When I arrived in Canberra in 1986, as well as growing my career and church life, I wanted to do some kind of community work, and ended up with the local AIDS Council. This was helped my ‘coming out’, as for the first time I met and worked with other gay and lesbian people on a common project. I did quite a lot of quasi-legal and other work, and was on the Board for a few years. But I haven’t had the time to do much recently. A few days ago, as I do every year, I attended the Annual General Meeting and was astonished to be awarded a life membership – Fabulous memberships they’re called! 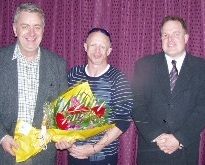 In this unflattering picture, taken at an AGM, I’m posing with Richard Allen (centre), recipient of the 2005 President’s Award and the incoming 2005-06 President, John Guppy (right).

Australia has done well in the struggle against AIDS and Canberra’s small local AIDS Council has done some pioneering work. But, worryingly, the rate of infections is again increasing slowly. Australia can be proud of its network of HIV/AIDS primary care providers, its specialist referral centres, its world-class research, its innovative health promotion and education and its active and engaged community sector. Australia has also made HIV/AIDS treatments available that have significantly increased the survival rates of people living with HIV/AIDS (PLWHA). These things did not appear by accident but through the deliberate planning that followed the development of a national strategy for action.

The job is not over; HIV/AIDS has not, and will not disappear from Australia while the HIV epidemic continues. Rises in new HIV infections in recent years have shown the need for a revitalised approach to HIV/AIDS in Australia by adapting to the changing epidemiological and social features of the epidemic.