A fascination in South Korea’s World Cup campaigns is the depth and breadth of support Korea’s people. Enthused by their country’s successes in the 2002 World Cup, huge crowds out in Korea’s main cities to watch the 2006 match between Korea and Switzerland last night on a giant video screens including 350,000 around Gwanghwamun in downtown Seoul, 150,000 in front of Seoul Plaza and 100,000 in the Busan Asiad Stadium. This picture is from Chosun Ilbo. 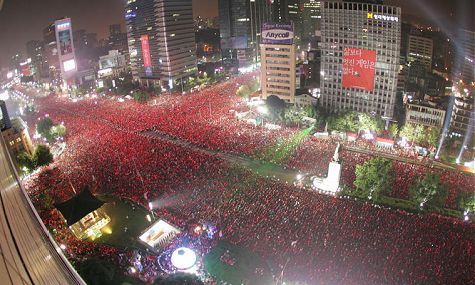 Vast apartment complexes and residential streets were lit up all night as people waited for the match and watched other matches. But in the end Korea was crushed 2-0 by Switzerland. Dae Han Min Guk rang through the Hanover stadium and the ‘Red Devils’ sang. The Koreans had several chances to score but none of them went in. Inability to convert opportunities cost Korea the match.